Home Blog list page Thor: recapping the story so far to get you ready for Thor: Love and Thunder 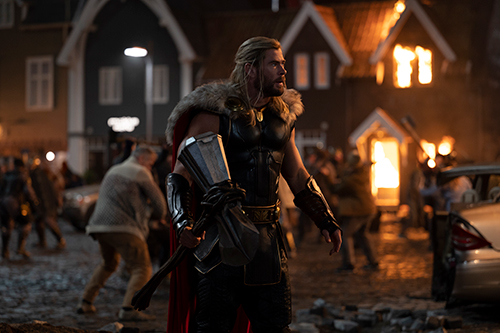 Thor: Love and Thunder is the latest chapter in the Marvel Cinematic Universe (MCU), and the latest movie in Marvel Phase Four.

It's been a long old road for the mighty Thor up to this stage, marked with a memorable series of highs and lows.

If you're struggling to remember how we got to this stage with Thor, sit back, relax and soak up our essential story so far. From the character's big-screen origins through his multifaceted struggles with enemies both domestic and foreign, this is, hopefully, a stirring reminder of what the MCU stalwart has endured so far.

After an ill-judged battle with the frost giants, the arrogant Thor invites the rage of his father, Asgardian leader Odin (Anthony Hopkins). Stripped of his armour, his hammer, Mjolnir, his birthright and his ego, Thor is sent hurtling across different realms to be an outcast in that most exotic of places, New Mexico. Hence begins his quest to prove himself worthy.

On Earth, Thor is instantly smitten with human scientist Jane (Natalie Portman). While he teaches her that science and magic are two sides of the same coin, she instills in him the value of humility and compassion. In the process, a tender romance develops.

Thor finds himself on a collision course with his treacherous half-brother, the trickster Loki (Tom Hiddleston), who is enraged upon discovering that he's not Odin's biological son. This is one of the most important dynamics throughout the Thor saga as the step-siblings vacillate between being allies and enemies.

When Thor defeats the destroyer that had been sent to Earth by Loki, he then overpowers his step-brother, dropping him from the bi-frost bridge into realms of the unknown.

They get unexpected help when Thor crosses the nine realms from Asgard to Earth. All he wants to do is take his brother back in order so he can face trial. Cue some very funny and explosive frenemy-style bantering between our heroes.

During the climax of Avengers Assemble, Loki brings the alien race the Chitauri through a wormhole to aid in his plan. However, the revitalised Avengers defeat Loki and his army, securing their first team victory. In the process, Thor is able to achieve his destiny of returning Loki to Asgard.

Jane, absent from the MCU since the original Thor movie, is, understandably, a bit peeved upon her reconciliation with the God of Thunder. Nevertheless, they let bygones be bygones – and she also gets to slap Loki for his attempted destruction of New York.

Thor and Loki put their uneasy rivalry and history to one side to help bring the dark elf Maliketh (Christopher Eccleston) to justice. Thor still doesn't entirely trust Loki (who could blame him?) but their bond deeps in this, the second Thor movie (widely considered to be the weakest instalment in the MCU).

Joss Whedon's Avengers sequel was blighted with post-production problems, reshoots and sub-plots that ended up going nowhere. Case in point: Thor enters a magical pool where he receives a vision of... something?

It may well be the Ragnarok that characterises his third solo adventure, and it also seems to anticipate the arrival of the Infinity Stones in the Infinity Saga arc. But in reality, it's a bit of deus ex machine that helps spur him on to Age of Ultron's climax.

Messy though it is, Avengers: Age of Ultron is an important stepping stone in the fragmentation of the Avengers initiative. The climactic battle in the European town of Sokovia becomes an emblem of the schism between the Avengers: should a superhero behave unchecked, or should they be held to account?

Quite apart from that, it's terrific to see the newly energised Thor re-appear to help save the day, the signature hammer Mjolnir in hand.

At the outset of Taika Waititi's first Thor movie, the God of Thunder bears witness to his greatest personal tragedy. The mighty Odin finally dies, closing a magisterial chapter in Asgardian history. Unfortunately, Odin's passing coincides with the arrival of the evil Hela (Cate Blanchett), Odin's firstborn child who has now reclaimed what she considers to be rightfully hers.

Waititi derives inspiration from the Mighty Hulk comic book arc, the ideal pretext for slamming Thor and Hulk together for the first time since Avengers: Age of Ultron. Having initially confronted each other in a gladiatorial arena on the planet of Sakaar, the newly formed duo begin an insurgent movement with the help of Valkyrie (Tessa Thompson) to bring down Hela, who has taken over leadership of Asgard.

In order to finish Hela, Thor must invoke Ragnarok, the prophesied battle that is set to destroy the realm of Asgard. To do so, he must rebirth the fire demon Surtur (voiced by Clancy Brown), recognising that the destruction of the kingdom will result in the safety of his people. In the process, Thor loses an eye but secures the future of all Asgardians.

Now bereft of a realm, the people of Asgard must rely on the charity of those on Earth. Now cemented as the Kind of Asgard (albeit absent an eye, like his father), Thor: Ragnarok ends with the title character taking his people on the Grandmaster's (Jeff Goldblum) spaceship in order to secure them a brighter future, reconciling with the slippery Loki in the process.

The first half of the Infinity Saga, Avengers: Infinity War ditches the 'baddie of the week' mentality to introduce a villain with the capacity to inflict genuine damage. Josh Brolin's Thanos, who had been teased throughout the Marvel Cinematic Universe (MCU), makes his proper entrance by overcoming the mighty Thor and then executing the series' previous big bad, Loki.

Later in the movie, Thor must craft a new weapon, Stormbreaker, his hammer Mjolnir having been destroyed by Hela in Thor: Ragnarok. To achieve this, he must travel to Nidavellir with Rocket (Bradley Cooper) and Groot (Vin Diesel), and seek the help of dwarf king Eitri (Peter Dinklage). The ensuing furnace scene more than re-establishes Thor's might ahead of the eagerly anticipated final battle.

Thor's emergence on the battlefield of Wakanda invoked cheers and whoops from MCU fans the world over. Arriving in a literal blaze of lightning, Thor is rejuvenated with a sense of purpose and a brand new weapon, Stormbreaker – but the power of Thanos knows no bounds.

In what was then a genuinely shocking development for the MCU, Thor uses all his might to subdue Thanos. However, the latter is able to activate the Infinity Gauntlet, powered by the Infinity Stones, and 50% of all life in the universe is utterly obliterated. This chilling development sets up the more despondent Thor in Avengers: Endgame.

A chunkier Thor is introduced at the outset of the box office-conquering Avengers: Endgame. Having come so close to defeating Thanos, and failed, Thor has instead wedded himself to ice cream and pizza in a plot development that some criticised as stereotypical and unfair. (He's also accompanied by Taika Waititi's scene-stealing rock monster Korg, who returns from Thor: Ragnarok.)

However, an intervention from the now fractured members of the former Avengers collective helps bring Thor back into the game. Once the Avengers realise they can use the Quantum Realm to step back in time and prevent Thanos' plan, it's time for Thor to ditch the Big Lebowski/Dude look and restore his sense of majesty.

This is one of the most moving developments in Avengers: Endgame, an indication of the Russos' rich tapestry of emotion, character development and action. Under-utilised in the Thor movies in which she appeared, Rene Russo's Frigga returns, and her character arc is resolved in a meaningful sense.

Having ventured back to the events of 2013's Thor: The Dark World, the movie in which Frigga was tragically killed, Thor is given some profound advice. It proves to be the making of him, rekindling his sense of worthiness, and allows Hemsworth to dig beneath the muscles and the comedy to poke at Thor's vulnerable interior.

We won't recap the entirety of Avengers: Endgame here. Suffice to say, the end of Thanos comes at a devastating cost with the loss of Iron Man, while Captain America exploits the Quantum Realm to travel back and enjoy a World War II date with his lost love, Peggy Carter (Hayley Atwell).

Thor's sacrifice is no less significant, as he hands over the reins of the new Asgard to Valkyrie. An amusing new team dynamic is then established as he jets off into the unknown with the Guardians of the Galaxy, gleefully sparring with the alleged captain of the ship, Star-Lord (Chris Pratt).

At the outset of the latest Thor movie, directed by Taika Waititi, the title character is anything but mighty. And this is seemingly by choice – Thor is no longer interested in propagating his powers and, as mentioned, leadership details now fall to Valkyrie.

However, the arrival of the fearsome Gorr the God Butcher (Christian Bale) forces Thor's hand, which leads to the movie's most progressive development. In her first proper appearance since Thor: The Dark World, Jane Foster is now revealed as the new Thor incumbent aka the Mighty Thor.

Mjolnir in hand, she forces our title character to confront his place in the world. This ensues with plenty of signature Waititi eccentricities, some huge laughs and a rockingly retro 1980s-flavoured soundtrack.

Are you ready for the next chapter in the MCU? Click here to book your tickets for Thor: Love and Thunder, opening in Cineworld cinemas on 7 July.