We're halfway through the year, and what a rollercoaster it's been. If you're want to be cheered up, then we're looking back at the big screen delights we got to enjoy before the lights went out?

We want to remind you of how many diverse and wonderful films were packed into the first two and a half months of this year. So scroll down and check out our blog list of 2020's most memorable movie scenes so far.

Sam Mendes' terrifyingly immersive World War I drama soars off the back of Roger Deakins' Oscar-winning cinematography. The illusion of a single unbroken shot reaches its apex during the jaw-dropping chase through a ruined town, accompanied by Thomas Newman's nerve-jangling music.

Taika Waititi's Oscar-winning comedy-drama is a war movie of an altogether different stripe. The Thor: Ragnarok director introduces us to young Jojo 'Rabbit' Betzler (Roman Griffin Davis), who imagines Hitler (played by Waititi) as his best mate. But the heart of the story resides in the tender encounters between Jojo and fugitive German girl Elsa (the brilliant Thomasin McKenzie).

3. Mike and Marcus are back – Bad Boys for Life

Some 17 years after the release of Bad Boys 2, and some 13 years after Hot Fuzz made that gag, Mike and Marcus are back to tear up the streets. Will Smith and Martin Lawrence rekindle that entertaining chemistry that sizzles more than the pyrotechnics on display. Director Michael Bay may have been absent, but these guys haven't lost a step.

4. Wake calls on the power of the sea – The Lighthouse

Director Robert Eggers' follow-up to The Witch is a deliriously entertaining, black and white story of enclosed paranoia. Willem Dafoe and Robert Pattinson devour the scenery as warring lighthouse keepers, and nowhere is this more evident than in the "hark Tritan" monologue. It's ridiculous, terrifying, hilarious and portentous all at once, and brilliantly delivered by Dafoe.

5. David completes his novel – The Personal History of David Copperfield

One of the year's loveliest films is this affectionate and spirited Charles Dickens adaptation. Remarkably, it comes from Armando Iannucci, king of scabrous wit in the likes of The Thick Of It. However, his take on David Copperfield ironically dials down the darkness and emphasis the sunniness, with the final Dev Patel-starring scene evoking smiles and years of joy.

Charlize Theron is, of course, famous for forceful, memorable performances in the likes of Monster and Mad Max: Fury Road. But her accomplishment in factual drama Bombshell is particularly impressive, demonstrating how brilliantly she gets beneath the skin of crusading Fox news anchor Megyn Kelly. The subtle make-up combined with excellent delivery make this a memorable scene.

It's hard to resist a courtroom drama, especially one based on a shocking true miscarriage of justice. Just Mercy is a classic example, sturdy, well-researched and with some belting performances from Michael B. Jordan as a crusading lawyer fighting for the rights of Jamie Foxx's Death Row inmate. You can see the finale coming, but that doesn't make it any less powerful.

Some comic book movies are fun, while others take dark delight in watching the world burn. Irreverent DC movie Birds of Prey falls in the middle: sure it's got chaos and carnage to spare, but its essential message of female solidarity is an empowering, even sweet, one. That said, we're stumping for Harley Quinn's (Margot Robbie) candy-coloured police station rampage – eye-popping and nuts in the best possible way.

Bong Joon-ho's triumphantly entertaining South Korean thriller made multiple firsts with its four Oscar wins. Slippery in tone, yet utterly assured and composed in structure, this story of the class divide cuts across language barriers in darkly comic yet uncomfortable ways. The use of peach fuzz to remove a key character is jaw-droppingly audacious and brilliantly staged.

Autumn de Wilde's Jane Austen adaptation makes a virtue of its pastel-coloured costumes, using the various hues to amp up Austen's biting sense of social satire. Yet this also resonates through Anya Taylor-Joy's commendably chippy and icy portrayal of the eponymous Emma, particularly in the shocking scene where she slanders likeable Miss Bates (Miranda Hart).

Music video veteran Melina Matsoukas makes her stylish and accomplished feature film debut with Queen & Slim. Daniel Kaluuya and Jodie Turner-Smith excel as the young lovers on the run, but their path towards true love is one laced with suspicion and violence. The first moment where we see them coming together while dancing sizzles with lustful chemistry.

12. Cecilia ventures into the attic – The Invisible Man

Following the collapse of Universal's proposed Dark Universe franchise, the emphasis now shifts to standalone reboots. And we're off to a flying start with Leigh Whannell's inventive and creepy The Invisible Man, in which Elisabeth Moss' Cecilia must confront a domestic threat that she can't see. That attic scene had us cowering behind our fingers for a good few minutes.

Disney-Pixar movies are renowned for their tear-jerking climaxes. That's what makes Onward's finale such a clever inversion of the formula – we don't get to see in detail what's going on, as we're positioned away from the action. As Barley Lightfoot's (Chris Pratt) dad is resurrected by the power of magic, we're forced to imagine the conversation, which elevates the emotional power.

Video game movies have built a reputation for being the worst of the worst. Sega adaptation Sonic, however, blew away the competition to become 2020's highest-grossing movie so far. All the way through, we were wondering when Jim Carrey would don the traditional Dr. Robotnik garb. And the inevitable mid-credits reveal struck a note of pure nostalgia, prepping us for the proposed sequel.

The true story of Britain's first-ever military wives' choir is transformed into a heartwarming story of redemption, courtesy of The Full Monty director Peter Catteneo. All the way through, Kristin Scott Thomas and Sharon Horgan establish chippy chalk and cheese chemistry as the warring choir leaders. However, it all comes good in that rousing Albert Hall climax.

Like Just Mercy, gripping legal drama Dark Waters is consumed with a sense of righteous anger. Mark Ruffalo is excellent as a lawyer out to incriminate an American chemical company that have been steadily poisoning the water supply of a local town. Shockingly, it's based on a true story, and the moment where Ruffalo's character Robert Billott takes a stand is hugely emotional.

17. The painting – Portrait of a Lady on Fire

French filmmaker Celine Sciamma is one of the finest working in cinema today. Her 2015 movie Girlhood won plaudits, as did her script for animated film My Life as a Courgette. She returned in 2020 with moody and sensual period romance Portrait of a Lady on Fire, exploring the forbidden affair between an aristocrat and the woman commissioned to paint her. The embers of romance can first be seen to glow during the initial painting scene – a masterclass in acting and direction.

18. Nicolas Cage versus tomatoes – The Color Out of Space

Nicolas Cage + H.P. Lovecraft – is there a more gloriously bonkers combination? The Color Out of Space fuses the ripe theatrics of the former with the creepy 'weird fiction' of the latter, in the process drawing director Richard Stanley (Dust Devil) out of hibernation. The gloopy, pink-hued horror that follows is memorable, but there is no greater special effect than watching Cage himself go buggo while eating tomatoes.

What's your most memorable movie scene of the year so far? Let us know @Cineworld. 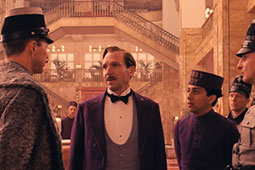 Cineworld 30 Day Film Challenge: name a movie starting with 'the'