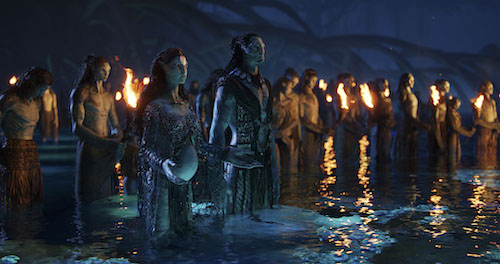 You can now book your tickets for Avatar: The Way of Water. But before you secure your seat for the biggest movie event of the season, have you caught the final trailer?

In truth, there isn't an awful lot new that's revealed. However, that doesn't stop the trailer from being a visual marvel, and no doubt you're eagerly awaiting James Cameron's visual spectacle on the biggest Cineworld screen you can find.

The interplay between light and liquid becomes a thing of wonder in The Way of Water trailer as heroes Jake (Sam Worthington) and Neytiri (Zoe Saldana) are forced to seek out a new home in the world of Pandora.

It seems as if they're smoked out by the rampaging forces of the thought-to-be-dead Miles Quaritch (Stephen Lang), now reincarnated in an avatar body of his own. This compels Jake, Neytiri and their children to take up with the aquatic Metkayina tribe, whose reveal unlocks breathtaking new corners of the Pandoran landscape.

In addition to the ravishing visual beauty, many of the original movie's themes are on display. Jake and Neytiri's children are compelled to bond with Pandora's underwater wildlife, not unlike Jake's fledgling bond with the ikran in the first movie.

There's also a repeated motif of emotional recognition. As Jake's son Neteyam (Jamie Flatters) rages against not being seen by his adoptive tribe, his Metkayina opposite number (and, presumably, eventual love interest) pledges, 'I see you.'

This hearkens back to the emotional cornerstone of the first film, which stressed that empathy can always cross species' boundaries no matter the cost. As with the first movie, The Way of Water looks big, bold and earnest, rendered in marvellous detail and on an outsized scale that demands the big screen experience.

Enough talk from us. Check out the trailer below and then book your Cineworld tickets for Avatar: The Way of Water. The movie opens on December 16.