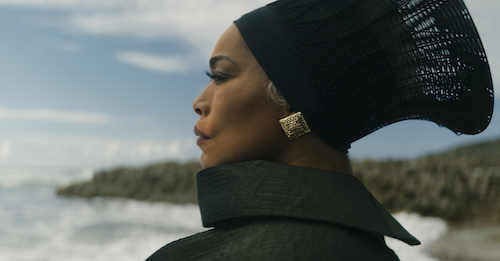 Will there be a dry eye in the house when Black Panther: Wakanda Forever is finally revealed?

You can now book your Cineworld tickets for the Black Panther sequel (scroll to the end of the post to do so). Firstly, however, the solemn yet inspiring new trailer commands the attention, poignantly invoking the legacy of the late, lamented Chadwick Boseman. Here's the new poster. Director Ryan Coogler and his cast and crew were thrown into a fraught situation upon Boseman's tragic death in 2020. How to keep flying the Wakandan flag when its standard-bearer was no more? The latest trailer begins by indicating the sheer level of grief felt by the Wakandan people, namely T'Challa's mother Ramonda (the majestic Angela Bassett).

The trailer moves from a funereal ceremony, in which T'Challa's helmet takes pride of place, to the anguished fallout from the character's actions at the United Nations at the end of the first movie.

By invoking more transparency as to Wakanda's place in the world, it seems that several other realms are now under threat from outside influence, prompting the fearsome Namor (Tenoch Huerta) to rise from beneath the waves to wreak havoc on Wakanda.

The sense of legacy is strong with this one, from the shot of the now-empty Wakandan throne to a final reveal of someone in the Black Panther suit. We don't know who it is but it punches through the sadness to finish the trailer with a sense of valedictory triumph.

Cineworld tickets are now on sale for the Black Panther sequel, so be sure to check out the trailer and then scroll down to claim your seat.

Who will the new Black Panther prove to be? Letitia Wright's Shuri, T'Challa's sister, emerged as a clear scene-stealer in the first movie and may well be first in line to the throne.

There are only brief glimpses in the trailer of Dominique Thorne's weapons designer Ironheart, described in the latest issue of Empire Magazine as Shuri's new right-hand woman. Barely glimpsed in the trailer but playing a pivotal role in the movie: returning stars Lupita Nyong'o as the primary Dora Milaje strategist Nakia, and Danai Gurira as the fierce warrior Okoye.

The time has come. Click here to book your tickets for Black Panther: Wakanda Forever, releasing at Cineworld on November 11.