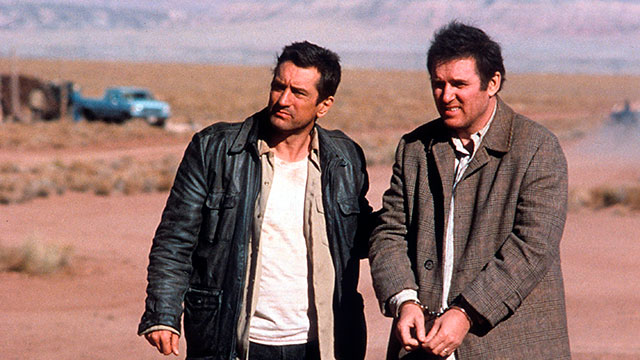 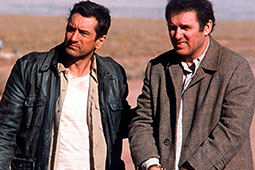 Noted comic actor Charles Grodin has sadly passed away at the age of 86, and we thought we'd take this opportunity to salute one of his finest comedy performances. We're not talking about the likes of The Heartbreak Kid (1972), in which he co-starred with Cybill Shepherd, or slobbery mutt movie Beethoven (1992), popular though they are.

We instead want to draw attention to a shamefully overlooked comedy that has flown under the radar for far too long. We're talking about 1988's Midnight Run, directed by Martin Brest, in which Grodin plays milquetoast embezzler Jonathan Mardukas. Having swindled the mob, Mardukas is picked up by grumpy bounty hunter Jack Walsh (Robert De Niro) who wants to turn in his quarry to secure the money for his retirement.

What ensues is a brilliantly ludicrous cross-country chase as gangsters and the FBI endeavour to track the pair down. However, nothing is more fractious, stressful, or funny than the sublime chemistry shared between De Niro and Grodin, both of whom relish the endless stream of great lines from George Gallo's script. ("Are you gonna propose? If not, quit staring at me.")

This was tough but we've settled on five classic scenes that both demonstrate Grodin's abilities and highlight Midnight Run as one of the finest buddy-comedy movies ever made.

The bull-headed Walsh doesn't suffer fools gladly, and doesn't hesitate to get Mardukas on a plane from New York to Los Angeles pronto. The latter feigns aviophobia in one of the film's most famous scenes, promptly getting them both thrown off and resulting in a search for alternative cross-country transportation. The scene is a microcosm of why the film works so well: Grodin is capable of exaggerating without mugging while De Niro plays it wonderfully straight, akin to a Martin Scorsese character who's wandered into an absurdist farce.

In a fantastic plot twist, it turns out that Mardukas is, in fact, very comfortable with flying. In fact, he's a licenced pilot himself, and attempts to get away from Walsh by commandeering a prop plane on a Native American reservation. In this scene, it's De Niro who gets to be brilliantly frantic, Walsh boiling over with anger as he realises the extent of the duplicity. The smooth integration of exciting action with farcical humour is another of the film's key strengths, although it wouldn't work without the conviction of the two central players. (Credit also to Danny Elfman's superb blues/soul-inspired score.)

Grodin takes centre stage in this memorable scene where Mardukas and Walsh have to play act as FBI agents, just to secure a bit of money from a restaurant. It distills the actor's brilliantly droll and dry delivery, particularly as he suspiciously eyes up the patrons of the establishment, Red's. The show is nearly stolen by De Niro who stumbles, either deliberately or accidentally, on the pronunciation of the make-believe scam 'the litmus configuration'. But it's really Grodin's show all the way.

Midnight Run is also loaded with a surprising amount of pathos. Despite their mostly hate-hate relationship, Walsh and Mardukas start to develop a genuine affection for one another, having bonded through a series of hair-raising exploits. Sadly, it's a friendship that can't last: they're destined to part ways, whether Walsh delivers Mardukas to jail or otherwise. This has the effect of crystallising their new-found friendship in ways that are quite lovely and profound. The campfire cinematography and bluesy score from Elfman in the following scene help cement Midnight Run as that rare comedy movie that is concerned with real emotion.

That beautiful theme from Elfman guides us to the conclusion of the movie, wrapping up everything in a neat bow. Walsh has achieved a measure of redemption by not trading in Mardukas for the bounty. Instead, he grants the hapless embezzler his freedom, and the gesture is repaid in kind by Mardukas who hands over a massive wad of cash that he had secreted about his person. This helps secure Walsh's dream of opening a restaurant. After this tender moment, Mardukas abruptly disappears from the scene, leaving us to bask in the wonderful chemistry between these two contrasting actors.