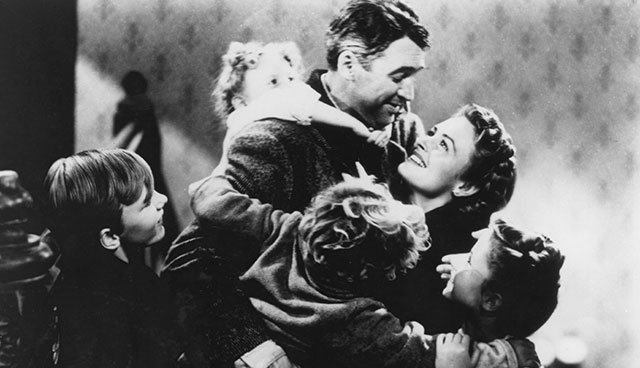 'Tis the season for watching movies – and not just any old movies. With Christmas just around the corner, we're getting you primed with our essential Cineworld list of Yuletide movie classics. Each of the following films can be found screening on a big screen near you – scroll down to find out more.

1. The Nightmare Before Christmas (7th December)

Sick of Christmas movies that make you feel like you've gorged on Quality Street? Then Tim Burton and Henry Selick's wonderfully morbid stop-motion animation is your antidote. Conceived by Burton, the ghoulishly dark director of Batman and Beetlejuice, and directed by Henry Selick (later of Coraline fame), the film tells the story of the Pumpkin King, Jack Skellington, who stumbles on the land of Christmas. Jack's plan? To kidnap the 'Sandy Claws' and take on the mantle of Father Christmas himself. In line with Selick's arresting moonlit visuals, Danny Elfman's gleefully macabre songs walk the finest of lines between horror and humour. If you're in the market for edgy Christmas fare, this is the perfect treat.

Click here to book your tickets for The Nightmare Before Christmas.

Feast on festive goodness as you experience the brilliant Elf back on the big screen. Before he helmed Iron Man, director Jon Favreau spun sentimental comedy gold from this sweet-natured story about a man raised as an elf in the North Pole. Will Ferrell shot to stardom in his role as Buddy, the naive yet loveable human who ventures to New York to locate his real father. Along the way, he discovers how Christmas is interpreted in cynical, wintry Manhattan, which gives rise to countless hilarious lines and set-pieces. James Caan, Zooey Deschanel, Mary Steenburgen and a pre-Game of Thrones Peter Dinklage round out the excellent cast.

There's a reason why this inspirational Frank Capra masterpiece regularly tops 'Best Christmas Movie of All Time' lists. It remains one of the most beautifully humane and moving movies to have emerged from the Hollywood studio system, adorned with a career-defining performance from the great James Stewart. He plays George Bailey, the well-intentioned and noble Bedford Falls resident whose life is chequered by a succession of victories and challenges. Beaten down by what he perceives as the failure of his apparently unremarkable life, the suicidal George is then visited by his guardian angel who reminds him that even the most commonplace existence can possess an extraordinary impact. Even if you've watched It's a Wonderful Life countless times before, don't pass up the chance to watch it on the big screen. And just try to hold in the tears during the climax.

Click here to book your tickets for It's a Wonderful Life.

Christmas cheer goes hand in hand with bullet-ridden, glass-smashing carnage in the definitive action classic from director John McTiernan. Bruce Willis vaulted from Moonlighting onto the Hollywood A-list with his role as the tough New York cop John McClane, who discovers a distinctly hostile takeover while attending his wife's Los Angeles office Christmas party. Enter the superbly silky and charismatic Alan Rickman as German terrorist Hans Gruber who plans to rob the Nakatomi Plaza vault – with only the shoeless, one-man-band McClane standing in his way. From the drum-tight script ("They're going after the lights!") to the intriguing contrast between Willis' testosterone and Rickman's elegant sense of menace, Die Hard remains one of the most intelligent and exhilarating action films of all time. And yes, sorry Bruce, it IS a Christmas movie.

Click here to book your tickets for Die Hard.

Will you be watching each and every one of these festive gems on the big screen this Christmas? Let us know @Cineworld.