Home Cineworld Blog Daniel Kaluuya joins the cast of Spider-Man: Across the Spider-Verse 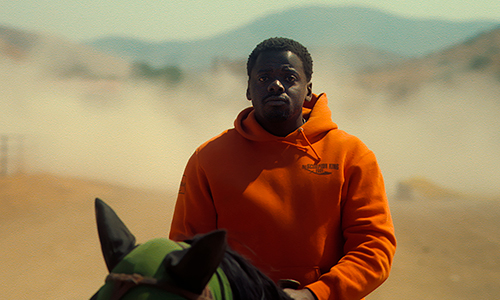 Daniel Kaluuya may not be appearing in this week's release Black Panther: Wakanda Forever. However, he is staying loyal to the Marvel formula by lending his vocal talents to next year's Spider-Man: Across the Spider-Verse, as shared via The Hollywood Reporter.

The Academy Award-winning actor is voicing Spider-Punk in the eagerly awaited sequel to Spider-Man: Into the Spider-Verse. The latter, spearheaded by LEGO movie creatives Phil Lord and Chris Miller, became the first comic book-themed movie to win any kind of Best Picture award at the Oscars (it won Best Animated Feature, specifically). It was praised for its witty, visually exuberant expansion of the Spider-Man multiverse that saw multiple iterations of the wall-crawler teaming up to dish out justice.

Lord and Miller return in their executive capacities for the sequel. As per the previous film, Shameik Moore's Miles Morales and Hailee Steinfeld's Gwen 'Spider-Gwen' Stacey are taking centre stage. They'll be forced to confront several villains including The Dot (Jason Schwartzman) and Vulture (Jorma Taccone, playing a different version of the character from Michael Keaton in the MCU).

Kaluuya's character Spider-Punk was created by writer Dan Slott and artist Olivier Coipel in 2015 for ‘The Amazing Spider-Man Vol. 3’ #10. Otherwise known as Hobart 'Hobie' Brown, he's a homeless teenager who becomes a hero to the oppressed citizens of New York in his dimensional universe.

Much has been made of Oscar Isaac's inclusion as Spider-Man 2099. The character made his comic book debut in 1992 and is otherwise known as Miguel O'Hara, a geneticist who attempts to replicate the original Spider-Man's DNA in other people with disastrous results. This leads to him being invested, or cursed, with paralysing fangs, superstrength, enhanced vision and a lot more besides.

Spider-Man: Across the Spider-Verse is being helmed by Joachim Dos Santos, something of a comic book veteran in his own right. On his CV: DC animated series Justice League Unlimited, plus DC Showcase short films The Spectre and Jonah Hex. Lord and Miller are again producing, and Moore will return as the voice of Miles. Dos Santos co-directs with Justin K. Thompson, working from a script by Lord, Miller, and Dave Callaham.