Struggling to pass the time while in lockdown? Then take inspiration from our list of marathon movie franchises that you need to binge-watch.

In descending order of total length, here are 11 epically exciting series' that will occupy you and spark your imagination. Are you willing to take just one of these on?

Approx. number of hours needed to complete 48 (24 films at roughly two hours each)

You may well need a vodka martini to power yourself through the back catalogue of Bond movies. The franchise kicked off with 1962's Dr. No, starring Sean Connery, and we're now poised to watch Daniel Craig bow out in style with 25th film, No Time To Die.

Approx. number of hours needed to complete 46 (23 films at roughly two hours each)

Who would have thought that 2008's relatively unassuming superhero movie Iron Man would kick off the most successful film franchise of the modern age? Since then, we've been to all corners of the Marvel Cinematic Universe (MCU), and its Phase Four stage is soon to kick off with Scarlett Johansson in Black Widow.

Approx. number of hours needed to complete 26 (13 films, including the various sequels and reboots, at about two hours each)

Warp into one of the most enduring sci-fi franchises of all time, which has been through a number of memorable iterations over the decades. From the initial William Shatner/Leonard Nimoy years through to Patrick Stewart's Generations crew, and finally the slick JJ Abrams-backed reboots, there's a lot to enjoy.

Approx. number of hours needed to complete 24 (12 movies at roughly two hours each)

The X-Men comic book franchise was kick-started back in 2000, and demonstrated how intelligent, thoughtful concepts could be great onto slick, CGI-driven action sequences. In recent years, we've been introduced to the younger iterations of Charles Xavier, Magneto and company, and there's plenty of entertaining material with which to occupy yourselves.

Approx. number of hours needed to complete 22 (11 films, including the original, prequel and most recent trilogies, plus the two anthology movies, at roughly two hours each)

Re-acquaint yourselves with the characters, battles and planets in a galaxy far, far away. Cinema was never the same after George Lucas unleashed Star Wars: A New Hope (later retitled Episode IV) on the world back in 1977, and the world-dominating franchise has now spawned three trilogies and several spin-offs.

Retrace the steps of Harry, Ron and Hermione by bingeing on J.K. Rowling's remarkable fantasy universe from the very beginning. The Harry Potter franchise charts a distinct course, from wide-eyed wonderment to angsty world-saving, and you can savour the richness of the various characters and stories as it plays out.

7. Planet Of The Apes

Approx. number of hours needed to complete 18 (Nine films – yes, we're including the Tim Burton one – at roughly two hours each)

Here's another franchise that's steadily evolved over the years. The original Planet Of The Apes bolted a fantastical science-fiction conceit to serious philosophy, ideas that were later picked up in the critically acclaimed reboot trilogy, starring Andy Serkis as intelligent simian Caesar.

Approx. number of hours needed to complete 18 (11 films, including all the various remakes, reboots and sequels, at around 100 minutes each)

So, this one's a bit complicated. You have the original Halloween movies, which started with John Carpenter's 1978 masterpiece, followed by Rob Zombie's standalone remakes, and then the Jamie Lee Curtis-starring reboot from 2018. Just to confuse you even more, the most recent film acted as a direct sequel to the 1978 movie. Geddit?

Approx. number of hours needed to complete 13 (Eight films at roughly 100 mins each)

You have a choice with Peter Jackson's groundbreaking series of J.R.R. Tolkein adaptations. Do you stick with the theatrically released edits, or the more luxurious extended verions? The latter cuts, in particular, are nirvana for movie fans and Tolkein enthusiasts, taking us even further into the extraordinary world of Middle-earth.

The Mission: Impossible franchise has been through a number of thrilling permutations since the Brian De Palma-directed original back in 1996. But one constant has been the presence of Tom Cruise, sprinting, leaping and punching his way through a series of outrageously nailbiting set-pieces. We're now waiting to see if the next instalment, Mission: Impossible 7, will live up to the hype.

Which of these movie franchises will you be bingeing on during lockdown? Let us know @Cineworld. 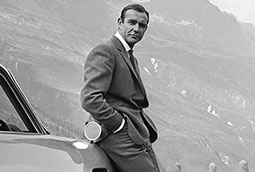