Home Cineworld Blog Emily: what you need to know about the upcoming Emily Brontë drama

Emily: what you need to know about the upcoming Emily Brontë drama 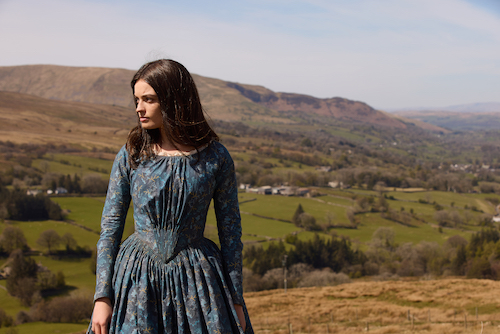 The upcoming period drama Emily is a visually ravishing and speculative account of one of the UK's most famous authors.

The eponymous Emily Brontë was forever cemented as the groundbreaking author of the Gothic and turbulent Wuthering Heights. However, she remains something of an enigma, allowing for a film that is, to an extent, bound by fact but also permitted to leap into flights of fancy.

The Emily Unlimited screening gets underway this October ahead of the movie's wide release. Here's what you need to know about the movie.

The film's centrepiece is the impressively fickle and not always sympathetic performance from rising star Emma Mackey.

The star of the hit Sex Education (she will soon appear opposite Margot Robbie in the Barbie movie), Mackey is tasked with humanising a complete enigma. Very little is known about the real Emily Brontë: the only works she has to her name are Wuthering Heights and a handful of poems.

This gives Mackey and her director Frances O'Connor a relative amount of liberation in terms of how they imagine Emily's character. She's realised as an introverted, standoffish character who is more comfortable in her own company and often sneers at the company of others (certain real-life accounts attest to this portion of Emily's character).

The movie wears its credentials on its sleeve as Emily vows to break free of convention, bonding with her free-wheeling bohemian brother Branwell (played by Fionn Whitehead) and striving for an elusive spark of influence that transcends claustrophobic societal expectations.

Mackey portrays these multifaceted contradictions with skill and grace, further cementing her status as a rising young star to watch.

2. Director Frances O'Connor has a strong sense of time and place

Frances O'Connor has long been actor of repute on stage and screen. Her versatility has been highlighted in everything from Jane Austen adaptation Mansfield Park to Steven Spielberg's sci-fi drama A.I. Artificial Intelligence, in which she gives an anguished performance as a human mother who abandons her robot child.

O'Connor now steps behind the camera for the first time with Emily. Her command of early 19th-century decor, costume and atmosphere is notable, and the movie's earthy, hand-held qualities appear to owe more to the grittiness of Andrea Arnold's take on Wuthering Heights from 2011.

Fittingly enough, for a movie that depicts the later stages of the Romantic period (embodied by the likes of Wordsworth), the movie is in tune with the elements in ways both pragmatic and mysterious. The shots of leaden Yorkshire skies and windswept moorland, sudden rainstorms and gardens filled with trilling birdsong gives a tactile sense of physical reality.

This contrasts with the relative claustrophobia of the interior sets of the Brontë's parsonage home at Haworth, further accentuated by the urgent, hand-held camerawork.

For those who aren't familiar with Emily Brontë's life, it might be hard to discern where fact ends and fiction begins in the movie itself.

However, inevitably one thing leads to another and the two characters consummate their burgeoning attraction in a dilapidated cottage (one of many visual references that anticipate key moments in Wuthering Heights).

Although Weightman existed in real life, and was an assistant curate to Emily's father Patrick (played in the film by Adrian Dunbar), sources differ as to his relationship with Emily and her sisters. It's been suggested that he initiated a relationship with Anne Brontë, the eventual author of the progressive and daring The Tenant of Wildfell Hall, although not much evidence exists to support this.

Regardless, the presence of a romantic element helps ground the movie in something more relatable and vivacious. it allows us the audience to reclaim Emily from the historical record and regard her as a real human being, one subject to fallible and mercurial impulses.

4. It dramatises Emily's relationship with her sisters

Emily mostly foregrounds the titular character's relationship with her sister Charlotte, later to become the author of the celebrated Jane Eyre.

Much of the sisters' on-screen relationship is grounded in fact. Emily was, indeed, briefly enlisted to serve as a teacher alongside her sister Charlotte (who used her experiences as a governess to inform the narrative of Jane Eyre), only to turn her back on the opportunity. We're also witness to Emily's journey to Brussels with Charlotte, a rare example of the introverted Emily broadening her boundaries.

That said, the movie also imagines a great deal of tension between the impulsive Emily and the relatively more straight-laced Charlotte. How much of this is accurate is up for debate, but it effectively dramatises the early 19th-century clash between romantic ideologies and the need to adhere to convention.

As Charlotte, actor Alexandra Dowling (Game of Thrones) gives an intriguing performance, by turns loving, judgmental and inquisitive. Emily's third sister Anne is perhaps short-changed by the narrative, although she emerges as a sympathetic figure in the early going as we discover how she and Emily bonded over the make-believe stories they fashioned together. Anne is portrayed by actor Amelia Gething.

Abel Korzeniowski is the noted composer of projects including A Single Man, Penny Dreadful and Nocturnal Animals. The Polish composer is renowned for bringing stately elegance and European classicism to his scores and Emily is no different.

Given the overwrought nature of Emily Brontë's life, Korzeniowski is given a launch pad to project an operatic and sweeping score. In the early going, a host of piping and exclamatory choral effects give us a sense of the inner artist struggling to emerge, before beautifully elegiac piano and string passages capture the nature of Emily's relationships with Branwell and Weightman.

The score notably darkens as the film goes on, anticipating the physical and emotional hardships faced by Emily in her all-too-short life. The music complements Mackey's excellent performance to imagine what the tragic author was feeling at this pivotal stage in her life.

Has our feature left you wuthering? Our Emily Unlimited screening gets underway on October 11 before Emily goes on wide release on October 14.