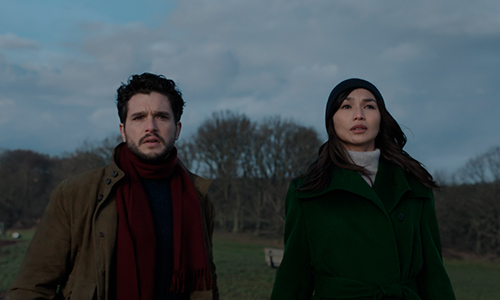 Did you watch Eternals in Cineworld over the weekend? If so, you've surely got questions about the mid and post-credits sequences. In this feature, we're addressing the latter scene, which showcases important developments within the MCU. (Check out our Eternals mid-credits breakdown.)

The latest Marvel Studios movie is another stepping stone in Phase Four of the Marvel Cinematic Universe (MCU). Nomadland director Chloé Zhao marshals the sweeping story of the Eternals and their ongoing quest to protect mankind.

The climax of the movie also leaves us speculating as to the future of the MCU, seeing as it's set to go to infinity and beyond. Scroll down to find out more.

What happens at the end of Eternals?

Betrayed by Ikaris (Richard Madden), who remains fanatically loyal to his creator, the Celestial known as Arishem, the remaining Eternals must band together. The Earth is being used as an incubator to breed another all-powerful Celestial being, a process known as the Emergence. This is a pattern that has been repeated with planets across the galaxy since time immemorial; the Eternals didn't know about it due to having their memories wiped.

Ultimately, the compassionate Sersi (Gemma Chan) finds the inner strength to defeat the emergent Celestial, growing into her role as the new Eternals leader after the murder of Ajak (Salma Hayek) at the hands of Ikaris. Sersi is then apprehended by the vengeful Arishem for breaking the Celestial code of conduct, stipulating that the Eternals must never interfere with the Emergence. She is captured along with fellow Eternals Kingo (Kumail Nanjiani), Sprite (Lia McHugh) and Phastos (Brian Tyree Henry).

This means that Sersi's human lover, Dane Whitman (Kit Harington), is left behind on Earth. He was also interrupted in the act of telling Sersi about his own family history (alluded to earlier by the gift of a ring from the Middle Ages that bears his family crest). Having finally grasped that his partner is an Eternal, and forever in thrall to the tyrannical Celestials, Dane retires to his own flat. There, and with a fair amount of nervousness, he opens a chest to reveal a sword. The body of the weapon appears to be infused with a life of its own, and just as he's about to touch it, Dane is interrupted by an off-screen voice.

Whose voice do we hear in the Eternals post-credits scene?

The off-screen voice belongs to Mahershala Ali as Blade, confirms Chloé Zhao. Ali will take over as Marvel's 'daywalker' in the forthcoming Blade reboot.

So, what's the significance of Dane and the sword?

The blade feeds off negative emotions while conferring extraordinary abilities on its user, and was forged by Merlin from a meteor, although Sersi was rumoured to have been involved in its creation. One imagines that the MCU is setting up a standalone Black Knight movie, not to mention a potential crossover film. (Scroll down to find out more.)

Does this set up a future Black Knight/Blade crossover movie?

It seems highly likely that this will play a part in the development of Marvel Phase Five (along with, presumably, the standalone Blade movie). Even more significantly, in the Marvel comics, both Dane and Blade have been members of MI13, a group set up by the UK government to protect the world from paranormal threats. Could Dane and Blade end up being the first two members of the MCU’s MI13?

There's also room to expand this further: in the comics, Blade was also part of the collective known as the Midnight Sons. The group tackled paranormal threats throughout the world, and also counted among their number Doctor Strange, Wong, Morbius, Moon Knight and Ghost Rider. Could we be looking at the Marvel Phase Five equivalent of the Avengers initiative?

What is the next movie in the Marvel Cinematic Universe?

Spider-Man: No Way Home is the next Marvel movie, and is due for release on 17th December 2021.

I want to see Eternals again – where can I book Cineworld tickets?