A new trailer has materialised for Fantastic Beasts: The Secrets of Dumbledore, and with it a pivotal part of the Harry Potter prequel universe. J.K. Rowling's Potter spin-off steps up a gear as the brewing conflict between wizards and no-majs (or muggles) comes ever closer. Here's the latest poster teasing the important characters on both sides of the divide.

Directed by David Yates and scripted by Harry Potter veteran Steve Kloves, The Secrets of Dumbledore is poised to be a spectacular blockbuster proposition when it arrives this April. Here's what we noticed in the trailer.

1. We return to Hogwarts

Let's tick off all the classic Harry Potter iconography that appears at the start of this Fantastic Beasts trailer. Firstly, we get a nostalgic glimpse of Michael Gambon as the older Dumbledore (presumably this is a tracked-in clip from the Potter movies, given that Gambon is now semi-retired). The older Dumbledore talks about the importance of memory as he gazes into a pensive (essentially a memory well).

We then move back in time as the younger Dumbledore (Jude Law) holds the blood pact necklace with the chain wrapped around his wrist. This alludes to the pact made between Dumbledore and his former friend/lover turned nemesis Grindelwald (Mads Mikkelsen). This pact means they cannot fight each other, which spells bad news for the muggles who are imperilled by Grindelwald's war-mongering ways.

Also glimpsed in this opening montage: a golden snitch and a Gryffindor student, which joyously restores the long-absent thrill of Quidditch in the wider Potter universe.

2. Mads Mikkelsen's Grindelwald finally steps out of the shadows

A replacement for Johnny Depp, the versatile and enigmatic Mikkelsen is surely a terrific choice for the movie's big bad. Mikkelsen has excelled at playing characters both creepy (Casino Royale; Doctor Strange; Hannibal) and unreadable (last year's Oscar winner Another Round). So, we're pretty assured that he has the requisite level of charisma and implied threat to communicate Grindelwald's diabolical aims as he attempts to obliterate all muggles with his newfound pureblood army.

3. There's an appearance from the younger Minerva McGonagall

How does one explain McGonagall's presence in this movie, given that she didn't start teaching until the 1950s? Regardless, we can't wait to see Fiona Glascott reprise the role of the acidic yet wise Hogwarts teacher. She first played the role in 2018's The Crimes of Grindewald, and here she has "disturbing news" to share with Dumbledore about his dark wizard nemesis. We wonder what that could be.

4. Jacob is recruited for the war and given his own wand

Content to remain in his New York bakery, muggle Jacob Kowalski (Dan Fogler) is recruited into the fold by witch Professor Eulalie 'Lally' Hicks (Jessica Williams). We then cut to the inside of a train (sadly, it doesn't appear to be the Hogwarts Express) where Jacob is given his first magic wand (he also drinks Gigglewater to delightful effect).

Jacob, of course, has skin in the war game given that his romantic interest Queenie (Allison Sudol) turned to the dark side during the climax of The Secrets of Grindelwald. Talking of Queenie, we see her sporting a brand new platinum blonde hairstyle during a banquet hall battle between herself and Jacob.

5. Dumbledore and Grindelwald's past is hinted at

We see Dumbledore and Grindelwald sitting in a cafe together and Grindelwald says, "With or without you, I'll burn down their world." Why is there the suggestion that Dumbledore would help in his schemes? Are we going to get a real discussion about their past relationship? One would imagine so, and the image of the cafe burning down would appear to be an apt metaphor of how their relationship withered and died.

Played by Maria Fernanda Cândido, Vincencia is an ally of Grindelwald's not to mention a candidate for the post of Supreme Head of the International Confederation of Wizards (ICW). By potentially installing his allies in positions of power, Grindelwald is better able to realise his fascist ambitions of wiping muggles off the face of the planet, as was portended at the end of The Crimes of Grindelwald.

7. The Fantastic Beasts play an active role in the upcoming war

From the ever-loyal Picket to Teddy the Niffler, Newt Scamander's (Eddie Redmayne) beloved beasts look set to play a bigger role in this movie than they did in the previous one.

Fantastic Beasts: The Secrets of Dumbledore is released in Cineworld cinemas on 8th April. 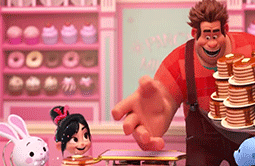