Nearly 10 years on, the Hunger Games series remains the high watermark for young adult dystopian thrillers. Anchored by Jennifer Lawrence's instinctive and commanding turn as Katniss Everdeen, the series went on to encompass five movies, grossing more than $3 billion along the way.

We've now got our first look (courtesy of Vanity Fair) at the prequel to the original Hunger Games films. Titled The Hunger Games: The Ballad of Songbirds and Snakes, it's set to bring us the origin story of the nefarious Coriolanus Snow, introduced in the previous movies as the scheming President of Panem and chillingly played by Donald Sutherland.

The younger Snow will be portrayed by actor Tom Blyth, best known for this year's acclaimed Terrence Davies drama Benediction. Blyth is joined in the following image by West Side Story star Rachel Zegler who plays Lucy Gray Baird. As before, the movie is adapted from an existing property by author Suzanne Collins.

Deadline has unveiled the synopsis for The Ballad of Songbirds and Snakes. It's as follows: "Years before he would become the tyrannical President of Panem, 18-year-old Coriolanus Snow is the last hope for his fading lineage, a once-proud family that has fallen from grace in a post-war Capitol.

"With the 10th annual Hunger Games fast approaching, the young Snow is alarmed when he is assigned to mentor Lucy Gray Baird, the girl tribute from impoverished District 12. But, after Lucy Gray commands all of Panem’s attention by defiantly singing during the reaping ceremony, Snow thinks he might be able to turn the odds in their favor.

"Uniting their instincts for showmanship and newfound political savvy, Snow and Lucy’s race against time to survive will ultimately reveal who is a songbird, and who is a snake."

It's recently been announced that Oscar-winning actor Viola Davis (soon to be seen in The Woman King) will be playing ruthless head gamemaker Dr. Volumnia Gaul (we love that name). She's described by director Francis Lawrence as "creative...fearsome... and formidable."

Lawrence returns to the series having helmed four out of the five Hunger Games movies (Gary Ross directed the first). The supporting cast includes Game of Thrones' Peter Dinklage and Wes Anderson regular Jason Schwartzman. No doubt they'll be fleshing out the pre-Katniss era of Panem in fine style.

The Hunger Games: The Ballad of Songbirds and Snakes goes on release on 17th November 2023. Tweet us your thoughts on the movie @Cineworld.

Preparations have begun. In 2023, return to the Games... pic.twitter.com/6n6YAaqCBb 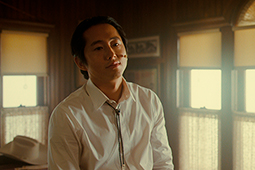