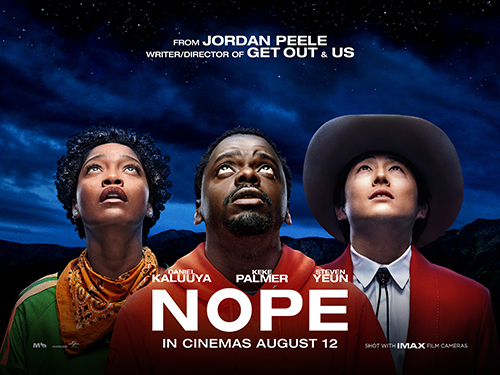 NOPE is the latest movie from Get Out and Us filmmaker Jordan Peele, so trust us when we say it's a big deal.

The Oscar-winning writer/director once again nails his signature blend of queasy, socially topical humour and flat-out horror. Except this time, the canvas is more significant than before, lensed with IMAX cameras by Interstellar DP Hoyte van Hoytema. (Check out our NOPE ICEE and IMAX offer.)

Scroll down to discover the film's memorable cast of characters.

Having collaborated to sensational effect on Get Out, Jordan Peele and Daniel Kaluuya have reunited for NOPE. The director has described Kaluuya as the De Niro to his Scorsese – high praise indeed, and NOPE develops their singular partnership in intriguing ways.

Kaluuya's character O.J. is a disillusioned California horse wrangler whose ambition to get his animals into the movie business has seemingly foundered. Even more pressingly, he and his sister Emerald (see below) have been struck by a personal tragedy, the circumstances surrounding which are genuinely bizarre.

Otis' journey of personal discovery is mined for pathos, tension and laughs. Indeed, Kaluuya's expertly timed, deadpan delivery of the film's one-word title is bound to induce roars of laughter. (Just wait for the scene in question – in Peele's classic style, the humour is a major cathartic release from imminent terror.) The loquacious Em is the mercurial, energetic flipside of her more taciturn, estranged brother, O.J. As played by Lightyear and Hustlers star Keke Palmer, Em is a relative outsider in her family's horse-wrangling business, having left it behind to make a name for herself in Hollywood.

However, she does have the gift of the gab, reiterating the USP that her family, Haywood, is descended from special stock. In fact, Em claims that she and her brother are descended from the black rider present in the early pioneering film footage titled 'Horse in Motion', directed by Eadweard Muybridge.

Watching Em and O.J.'s contrasting reactions to the ensuing paranormal spectacle is one of the film's greatest pleasures. Here we have, arguably, the most interesting character in NOPE. We won't give in to spoilers, but Ricky's backstory provides NOPE with some of its most disturbing sequences, and full credit to Steven Yeun's performance for suggesting the character's PTSD.

As we're introduced to Ricky, he's the entrepreneur behind a tacky Wild West amusement park. Watching how his destiny intertwines with that of O.J. and Em is bound to throw the viewer more than a few curveballs. In fact, there's one particular sequence involving Ricky where Peele outdoes himself in the sheer horror stakes. You'll know what we mean when you see it. The OA star Brandon Perea brings welcome comic relief to the role of Angel Torres. A tech guru who works in the local supermarket, Angel becomes a valued ally to both O.J. and Em as the sinister activity around their ranch begins to escalate. Cult actor Michael Wincott is always welcome on the big screen. His intense presence and unmistakeable gravelly voice have featured in everything from Robin Hood: Prince of Thieves to The Crow. Click here to book your tickets for NOPE, on release now in Cineworld.

Tags: cineworld movies, get out, us, jordan peele, daniel kaluuya