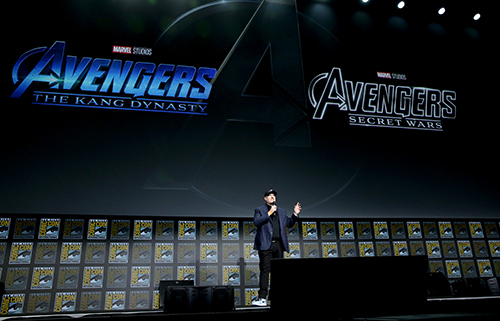 Marvel Phase Five is set to begin with Ant-Man and The Wasp: Quantumania in 2023, before concluding with Thunderbolts in 2024.

But what about Marvel Phase Six, as confirmed at the 2022 San Diego Comic-Con? It's set to conclude the retroactively named 'Multiverse Saga', which spans Phases Four to Six in total.

Here's the Cineworld blog lowdown of the Phase Six movies in order of release.

Will John Krasinski return as Reed Richards? Does his grisly fate in Doctor Strange in the Multiverse of Madness point towards the role being recast again?

These are just two of the questions swirling around Marvel's proposed Fantastic Four reboot. Spider-Man director Jon Watts was originally signed to the movie, only to later jump ship.

So, with the cast and director both unknown, what do we know about the Fantastic Four movie? Well, it'll officially initiate the titular Marvel collective into the Marvel Cinematic Universe (MCU) for the first time.

The previous two Fantastic Four movies were owned and distributed by 20th Century Fox as self-contained movie entities. However, now that all the Fox assets come under the umbrella of the Disney-distributed MCU, we can hope that some genuine magic will be injected into the property.

Given the new-fangled possibilities of the multiverse, it's entirely possible that John Krasinski can be reinstated as an alternate version of Reed Richards on Earth-616. Whether he's still a member of the Illuminati collective, as per the events of Multiverse of Madness, remains to be seen.

Fans have been clamouring for Krasinski's real-life wife, Emily Blunt, to take on the role of Sue Storm/Invisible Woman. However, Blunt has downplayed such suggestions.

As for the casting of Johnny Storm/Human Torch and Ben Grimm/The Thing? That's just as big of a mystery at the moment.

Regardless, our new-look Fantastic Four movie lands at the end of 2024, so we can expect to get some concrete casting and director details in the next few months.

Lovecraft Country's Jonathan Majors was introduced as a variant of the all-powerful Kang the Conqueror at the end of Loki. This was, however, a multiversal Kang variant named 'He Who Remains.'

How Kang will manifest in the next Avengers movie is anyone's guess at this stage. But whatever form in which he appears, he portends bad news for any new-look Avengers collective (the details of which are, similarly, thin on the ground at the moment).

Created in 1964 by Stan Lee and Jack Kirby, Kang possesses formidable, even transcendent, abilities, including the ability to time jump. In fact, there was recently a comic book arc by the name of The Kang Dynasty, published from 2001 to 2002. It detailed how the megalomaniacal Kang took over the Earth with help from his son, Marcus, so will the new movie import elements of this storyline?

Regardless, with the charismatic and talented Majors in the role of the new Thanos, it's sure to be an entertaining ride. Avengers: The Kang Dynasty will be directed by Destin Daniel Cretton who enjoyed a big Marvel hit in 2021 with Shang-Chi and the Legend of the Ten Rings.

We're surely expecting martial arts master Shang-Chi to be one of the cornerstones of the new Avengers team. We can also potentially throw in the Eternals, Ant-Man, Doctor Strange and the Black Panther squad, plus the team of Marvel Phase Five concluder Thunderbolts. Might we also throw in Tom Holland's Spider-Man, too?

Kevin Feige has himself said that Avengers movies should be "a capper" to each Marvel phase. Given the sprawling potential of the film's ensemble cast, there's no denying the potential for Avengers: The Kang Dynasty to dwarf even the mighty Avengers: Endgame in its scope.

Of course, we don't know the particulars at this stage. But with Avengers: The Kang Dynasty acting as something of an entrée, Avengers: Secret Wars will definitely be the most ambitious and expansive Marvel movie to date.

Little wonder that Avengers: Endgame directors Joe and Anthony Russo reportedly quailed at the sheer scale of the project before officially bowing out of the running. In fact, it was Kevin Feige who confirmed that the Russos would not be helming the movie.

As ever, we don't know if the eventual movie will show much loyalty to its comic book source. In this instance, we're hoping to goodness it does. In the comics, Secret Wars was a 12-issue event that first debuted in 1984 and was reworked again in 2015. The story sees the most powerful Marvel superheroes face off against the most powerful villains in an epic fight that takes place on a planet called Battleworld.

The original 1984 comic arc was labelled a crossover event, designed as a collaboration between Marvel and toy designer Mattel. Our heroes were dispatched by a villain named The Beyonder to a distant planet where many of their abilities and backstories were altered. (For instance, Spider-Man gets his black symbiotic costume that later molds to Eddie Brock to become Venom.)

The 2015 revival arc dealt with the attempted destruction of the multiverse by The Beyonders. They attempted to do so via means of a deadly incursion, the very term invoked by Charlize Theron's Clea at the end of Doctor Strange in the Multiverse of Madness.

Incursions describe the collision of different universes and the consequences that ensue. In Multiverse of Madness, it's the Doctor Strange of Earth-838 who causes it. Given that the foundations for an incursion have now been laid in the MCU, can we expect Avengers: Secret Wars to take more inspiration from the 2015 story arc?

Those familiar with the Secret Wars comics will also be aware of Molecule Man's involvement. He's essentially being used as a pawn in the Beyonders' scheme, although this plan is ultimately foiled by the Fantastic Four's nemesis Doctor Doom. Already, there are linking opportunities between the various movies that make up Marvel Phase Six.

News of the cast, director and proposed villain is currently non-existent. It's highly likely, as with the Infinity Saga, that a single 'big bad' will traverse two movies. In that instance, it means Kang the Conqueror will lay down the ultimate gauntlet to the Avengers.

It's been reported that Avengers: Secret Wars will have a different director to Avengers: The Kang Dynasty. However, no name has been announced.

Stay tuned to this blog post over the coming months as we update it with more essential information about Marvel Phase Six.

In the meantime, tweet us @Cineworld with your Marvel Phase Six casting and story theories.