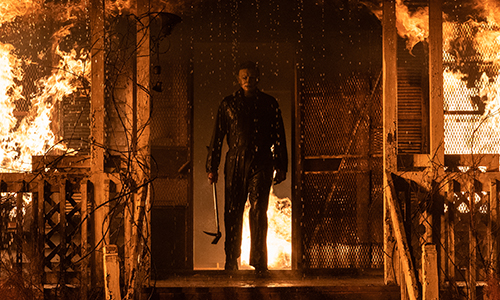 Looking to scare yourself senseless at Cineworld this Halloween? We've got the answer in the form of the diabolical Michael Myers in Halloween Kills, for which you can now book your tickets. The masked killer is on the rampage again in the follow-up to the hugely successful Halloween reboot from 2018, which wiped out years of unnecessary sequels to reset the clock on the classic horror franchise.

The dream team of director David Gordon Green and co-writer Danny McBride are back, and they promise to serve up another smorgasbord of fan-pleasing nostalgia and bloodthirsty nastiness. As before, the story is anchored by the fearless Jamie Lee Curtis as Laurie Strode, the sole survivor of Michael's original 1978 rampage who, at the end of the most recent movie, succeeded in trapping her nemesis inside her booby-trapped house.

But it takes more than an inferno to stop the maniac known as Michael. As Laurie explains in Halloween Kills, every time Michael claims a new victim, he "transcends", seemingly becoming less and less human and more a demonic manifestation of pure evil. As before, there's a multi-generational approach to the terror with both Laurie's daughter Karen (Judy Greer) and her granddaughter Allison (Andi Matichak) being compelled to take up arms against Michael.

The new movie ties itself back to John Carpenter's masterful original in more ways than one, as a mob gathers to play Michael at his own deadly game. Expect more chills from those sparse, unforgettable Carpenter piano chords on the soundtrack, and be sure to analyse every shadowy facet of the frame for a glimpse of Michael hiding in the darkness...

Click here to book your tickets for Halloween Kills, opening in Cineworld cinemas on 15th October.

Scream: read our trailer breakdown for the upcoming horror movie