Thought Hugh Jackman's Wolverine had breathed his last at the end of Logan? Think again. Jackman will be strapping on the adamantium claws once more opposite Ryan Reynolds in Deadpool 3.

Yes, the ongoing social media bromance between the X-Man and the Merc with a Mouth is about to become a cinematic reality. As expected, the ever-engaged Reynolds confirmed the news on his Instagram page.

Given his infamous quick wit and penchant for trolling, many assumed Reynolds to be taking the mick. However, the casual appearance of the game Jackman in the video itself confirmed the news: Logan and Deadpool will be sharing screentime.

Here's the video in question, which appears to culminate in Deadpool 3's release date: September 6, 2024. And you may not look at Whitney Houston's theme from The Bodyguard in the same way again.

Reynolds and Jackman have been tearing up the social media space for years now, enjoyably mocking their respective franchises. Here are a couple of examples of their priceless chemistry, which hopefully will translate into big-screen magic in Deadpool 3.

The Deadpool 3 news was subsequently lampooned by Logan director James Mangold (who subsequently had to defend his dark sense of humour from the internet masses).

So, what are we to make of this? Apart from it being tremendously exciting, we're left with a lot of questions.

After all, Deadpool 3 hasn't even started filming yet. Heck, the director, Shawn Levy (who helmed Reynolds in 2021 hit Free Guy), was only confirmed fairly recently. So, as far as Wolverine's role in the drama, it's anyone's guess.

As a side note, Shawn Levy also tweeted about the news, further confirming the legitimacy of Reynolds' announcement.

I want to take minute to thank #StrangerThings for training me to keep my big mouth shut. This news has been burning a hole in my lips for weeks now🙃⚔️

Of course, it all but confirms we're getting the X-Men in the MCU for the first time. Let's all take a deep breath as we dwell on the ramifications of that.

This year's Doctor Strange in the Multiverse of Madness brought the Illuminati, spearheaded by Patrick Stewart's Charles Xavier, into the Marvel multiverse. However, he and his fellow Illuminati members were all swiftly (and gruesomely) obliterated by Wanda Maximoff (Elizabeth Olsen).

The Wolverine/Deadpool news makes explicit what the Doctor Strange sequence left hanging in mid-air. The Marvel mutant family will be taken into the MCU fold some 22 years after they made their cinematic debut in the first X-Men movie.

Aside from that? We've got nothing. We'll simply have to keep you updated as the cameras roll on Deadpool 3. In the meantime, be sure to tweet us your thoughts @Cineworld. 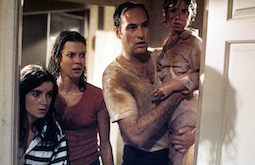