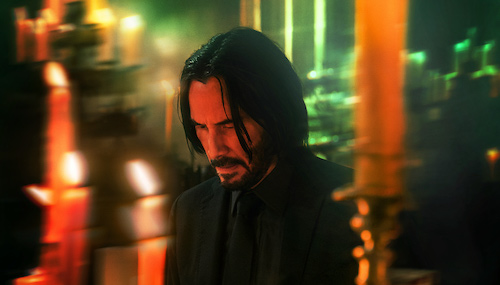 Having blasted his way through the underworld over the course of three John Wick movies, we wonder: how many more people can Keanu Reeves kill in balletic and exhilarating fashion?

No matter, the first trailer for John Wick: Chapter 4 shows there's plenty more potential for violent collateral damage and eye-watering action in the hugely successful franchise. Plus, it has bullets being deflected with katanas. What's not to like?

At the end of the third chapter, Parabellum, Reeves' sharply attired and fearsomely equipped titular assassin went into hiding with the Bowery King (Laurence Fishburne). Wick vowed to bring the entirety of the High Table to its knees, no mean feat given the movie had already sported a truly impressive kill count.

Things get more personal, and even mythological, in the trailer for the fourth instalment. The scope of the series now takes in France and Japan as Wick reckons with the spectre of his late wife, the person who initially compelled him to put his violent life aside.

Bound to the rules of the High Table via his family connections (we're curious about the full ramifications of that), Wick is drawn into one-on-one combat with European aristocrat the Marquis de Gramont (played by the reliably villainous Bill Skarsgard).

Each of the John Wick movies has shown a knack for escalating the violent mayhem of its set pieces. When you consider that a shoot-out from behind the wheel of a (door-less) Ford Mustang is probably the soberest of this particular film's spectacles, you can be assured of a wild ride.

Check out the trailer for John Wick: Chapter 4 and prepare for the movie's arrival on March 24, 2023.