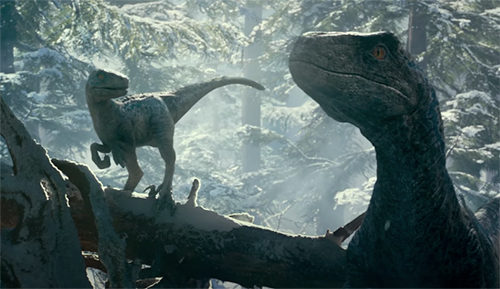 The first trailer for Jurassic World: Dominion has stomped online, promising a spectacular culmination of the Jurassic World saga. Director Colin Trevorrow, who sat out the second movie, Fallen Kingdom, returns to conclude the sweeping struggle between man and beast with Chris Pratt and Bryce Dallas Howard joined by a host of original Jurassic Park favourites. Scroll down to check out the highlights from the trailer.

1. It's the natural culmination of the original generation Jurassic Park storyline

Steven Spielberg's 1993 masterpiece Jurassic Park kicked this whole saga off, and right from the beginning the dino thrills were underscored with a melancholy, chilling reality. What happens when life finds a way and the disparate worlds of humans and dinosaurs collide? The remaining Jurassic Park and Jurassic World movies built on this premise, although the dinosaur threat was largely contained to both Isla Nublar and Isla Sorna, barring the short-lived San Diego T-Rex breakout in The Lost World: Jurassic Park.

However, at the end of Jurassic World: Fallen Kingdom, it seemed like the genie was well and truly out of the bottle as the dinosaurs escaped onto the American mainland. In Dominion, this premise comes to fruition, finally realising the fears of chaotician Ian Malcolm (Jeff Goldblum) who makes a welcome return in this movie. In Dominion, we finally get to glimpse the practical realities, and threats, of mankind attempting to live side by side with its prehistoric ancestors. 2. The bond between Owen and velociraptor Blu is as important as ever

Chris Pratt's animal wrangler Owen was first introduced in Jurassic World, and his skills at handling the velociraptors were evident. He built up a degree of trust with the pack leader Blu, and this inter-species bond was further developed in Fallen Kingdom. In Dominion, Blu is still alive and now has young of her own, and still Owen feels compelled to protect her. Blu's DNA was at the heart of a diabolical mutation plot in Fallen Kingdom, leading to the creation of the IndoRaptor, so maybe the nefarious InGen scientists have more up their sleeve this time around? Who can resist smiling once the original Jurassic Park trio shows up? Sam Neill's Alan Grant, Laura Dern's Ellie Satler and the aforementioned Jeff Goldblum are back, and they're now a dab hand at this dinosaur malarkey. It remains to be seen whether they'll be occupying their familiar, designated roles: Grant and Ellie the cautious pragmatists and Ian Malcolm, the traditional alarmist. Certainly, Ian issues a stark warning about "dominion" so he looks like the same person whom we've come to know across the course of several films. 4. Dr. Henry Wu is older but possibly still up to his old tricks

B.D. Wong's mysterious character Wu was a mere side character in Jurassic Park, but the Jurassic World movies have boosted him to the role of apparent antagonist. His genetic experiments have lead to the creation of both the Indominus Rex and the IndoRaptor, and the Dominion trailer indicates, via a shot of some DNA graphics, that Wu may be about to unleash a new form of prehistoric hell. 5. These dinosaurs have truly gone global

The trailer opens, Western-style, with Owen attempting to wrangle a herd of Parasaurolophus (aka Elvis) while on horseback. However, this story broadens its reach beyond America and the associated Latin American islands that traditionally make up the Jurassic Park universe. It's the first film in the franchise to occupy a European setting, although we can't tell where Claire (Bryce Dallas Howard) is being pursued by the alleged atrociraptor, nor can we tell where Owen's motorbike/raptor chase is taking place. The movie was partly shot in Malta, although the location may be standing in for somewhere else in the finished film. 6. There may be a new dinosaur theme park...

Alan Grant looks justifiably concerned when he takes a helicopter ride over a mysterious, and vast, arena. Does the arena's apparent tropical setting suggest that InGen and W have secretly been developing a new dinosaur theme park on the sly? Either that, or we're getting some sort of return to the old, overgrown Jurassic World site to bring the narrative full circle. Jurassic World: Dominion presents a new kind of feathered raptor although, in reality, this is closer to how the creatures first appeared. In the first Jurassic Park movie, the design of the raptors owed themselves more to the deinonychus species. Not long after Jurassic Park's release, paleontologists discovered the presence of the utahraptor, which bore several striking similarities to the movie's fictional raptor design. The late, great effects designer Stan Winston then quipped: "We made it, then they discovered it." 8. The dilophosaurus makes a comeback

Hands up, who remembers the dilophosaurus scene in the first Jurassic Park as one of the film's most disturbing? (It's certainly true for this writer.) Well, nostalgics rejoice as the frilled, poison-spitting lizard makes a return in Dominion to howl in Claire's face. So, we get a shot of what appears to be a T-Rex foot, but is that an extra raptor claw appendage as well? It makes us think that Wu and his team can't leave well enough alone, and have needlessly conjured another prehistoric monstrosity. As Malcolm wryly observes, they're always compelled to make them bigger.

Jurassic World: Dominion is released in Cineworld cinemas on 10th June 2022. What were your favourite moments from the trailer? Let us know @Cineworld.

The Batman: 5 reasons to book your Cineworld tickets now