This November, James Bond is back – only this time he is not alone. As the espionage icon prepares for his return to the big screen in No Time to Die, he may be in a state of shock when he discovers a threat to his supremacy. That’s because change is coming in the form of Lashana Lynch’s mysterious character Nomi.

Before we return to the world of car chases, gunfights and tuxedos, allow us to introduce you to Lashana Lynch, No Time to Die’s new secret agent – who may well take on the 007 mantle in the future…

Who is Lashana Lynch?

Lashana Lynch is an upcoming British actress, with only a handful of big and small screen projects under her belt. Lynch made her big-screen debut in sports drama Fast Girls back in 2012, before returning to the small screen with roles in the likes of Silent Witness, The 7.39, and Death in Paradise.

Lynch’s star is on the rise following her role in Captain Marvel, one of the final movies in Phase Three of the Marvel Cinematic Universe (MCU). She plays Maria Rambeau, loyal ally to Brie Larson’s title character, who helps unlock Captain Marvel’s memories of her past life as a human pilot. And now a prominent role in No Time to Die is sure to make Lynch a household name.

The No Time To Die trailer gives us a brief glimpse of Nomi, and the action-oriented skills she possesses, but how she came to be a 00 agent remains a mystery at this stage. We do know that upon meeting a returning James Bond she has been a 00 for two years, having entered active service after Bond’s retirement.

Hopefully Bond can get over the surprise, as Nomi looks to be pivotal in assisting him to stop evil villain Safin (Rami Malek), who shares a twisted connection to Bond’s lover Madeleine Swann (Lea Seydoux).

Nomi has no time for Bond and his antics

Bond is defined by his career and is bound to be more than a little unhappy with someone else stealing the limelight. In the trailer, we see Bond meeting the new 007, presumably for the first time, and it seems there will indeed be some tension, albeit the humorous, good-natured kind, between the two secret agents.

“If you get in my way," says Nomi rather sternly, "I won't hesitate to put a bullet in your knee… The one that works." If that quip doesn’t bear the hallmarks of writer Phoebe Waller-Bridge, then nothing does; the Fleabag creator was brought in at Craig’s request to punch up the script. Fingers crossed Waller-Bridge’s influence will shine through in Nomi’s persona and dialogue.

Is Lashana Lynch going to be the new 007?

So far, there does not seem to be much word on whether Lashana Lynch is taking over as 007. But given No Time To Die has been confirmed as Daniel Craig’s final Bond movie, and with filmmakers, no doubt wondering where they will go next, Lynch could be the perfect person to lead the franchise.

Producers and franchise gatekeepers Barbara Broccoli and Michael G. Wilson (the former is the daughter of legendary Bond producer Albert R ‘Cubby’ Broccoli) say the character will stay male. In an interview with Variety, Broccoli says: “I believe we should be creating new characters for women — strong female characters. I’m not particularly interested in taking a male character and having a woman play it. I think women are far more interesting than that.”

Does that mean that Lynch could get her own spin-off series away from the Bond universe? Broccoli and Wilson are already branching out with upcoming assassin thriller The Rhythm Section, starring Blake Lively (A Simple Favour), so maybe they’re willing to experiment?

What happens in No Time to Die?

At the start of No Time to Die, James Bond has left active service and is enjoying a peaceful life in Jamaica (the spiritual home of Bond, where author Ian Fleming lived and originated many of the stories). However, Bond’s peace is cut short, when his old friend and CIA agent Felix Leiter (Jeffrey Wright) tracks him down and requests his help in the search for a missing scientist.

This seemingly simple mission turns out to be something much more complicated and treacherous, putting Bond on the trail of the mysterious villain Safin, who’s armed with dangerous new technology the likes of which the world has never seen before. Fortunately, Bond has some old allies on his side: M (Ralph Fiennes), Moneypenny (Naomie Harris) and Q (Ben Whishaw).

No Time To Die is released on the 12th of November. Let us know @Cineworld if you think Lashana Lynch will become the new 007. 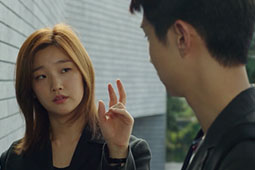