As Steve Rogers (AKA Captain America) struggles to embrace his role in the modern world, he teams up with fellow Avenger Black Widow (Scarlett Johansson) to battle a new threat, an assassin from Steve’s past, known only as the Winter Soldier.

With Steve Rogers waking up in the modern day after the WW2-set events of Captain America: The First Avenger, it was always going to be that this sequel was going to look and feel a whole lot different to its period predecessor.

Its writers, Christopher Markus and Stephen McFeely, were thus free, with Marvel’s approval of course, to make it whatever movie they wanted, and they found their inspiration in the paranoid conspiracy thrillers of the 1970s.

All The President’s Men, Three Days of the Condor and The Parallax View were to be the cinematic references points for The Winter Soldier, in the way that WW2 movies were the inspirations for The First Avenger.

Brilliantly, newbie directors Joe and Anthony Russo (they’re brothers, by the way) managed to convince All The President’s Men and Three Days of the Condor headliner Robert Redford to come on board as SHIELD honcho Alexander Pierce, solidifying the movie’s credentials as a thriller that can stand shoulder-to-shoulder with those paranoid 70s classics.

Marvel struck gold with the hiring of the Russos. Primarily known for their comedy work, they brought a realistic grounding to their work on The Winter Soldier, bringing a grown-up edge to the MCU. It’s good news that Marvel have entrusted the next two Avengers movies to the siblings.

Hats off to Robert Redford as SHIELD boss Alexander Pierce. Though he may have a few more lines on his face, he looks remarkably unchanged from his 70s heyday and his inclusion in The Winter Soldier gives the film real class.

What a pity he’s – SPOILER ALERT – killed by his old friend, Samuel L. Jackson's Nick Fury (when it’s discovered he’s a Hydra mole within SHIELD), meaning he won’t be back for any Marvel movie encores…

Despite The Winter Soldier taking place nearly 70 years after the events of The First Avenger, the movie still found a place for a cameo from one of the that film’s main characters – Agent Peggy Carter.

But instead of casting a new actress as the 90-something co-founder of SHIELD, the Russos chose to film original actress Hayley Atwell in the part and then digitally superimpose a genuine old lady’s wrinkles onto her. The result is uncannily convincing.

It took six days to film The Winter Soldier’s standout scene. You can forget your CGI extravaganza finales and multi-million dollar car chases – the best moment in this movie simply features Captain America and nine nail-hard SHIELD agents in an elevator, beating the poop out of each other.

In fact, the filming of the scene was so gruelling that actor Frank Grillo, who plays SHIELD’s Brock Rumlow says both he and Chris Evans ended up covered in bruises.

“There were a couple times in that elevator scene where [Evans] said, ‘Dude, you’re hitting me,” Grillo told Entertainment Weekly. “I go, ‘We are in an elevator. My stunt guy’s not coming in here. They won’t be able to shoot your face. We gotta do this.’ And we just start punching each other. We did that scene for six days. We were literally covered in black and blues. That’s why I love him.”

In stark contrast to Alan Silvestri’s warmly rousing The First Avenger soundtrack (although fragments of it do appear), Henry Jackman’s Winter Soldier score amped up the grinding, industrial sense of threat. It fits the storyline perfectly, reflecting both the encroaching threat of Hydra and Cappy’s position as a contemporary, 21st century superhero.

The soundtrack was a controversial one and had its detractors but few could deny its effectiveness.

New to the MCU

"He's the first African-American superhero,” he said at the time. “It makes me feel all the work I've done has been paying off. I have a son, nephews and nieces, and I love the idea that they can dress up as the Falcon on Halloween. They now have someone they can idolise. That's a huge honour for me."

The photo of a young Alexander Pierce (at around 1h 30 mins) is a still image from the 1992 Robert Redford film Sneakers.

Listen out for the first mention of Doctor Strange in the MCU when, while Rogers and Romanov are questioning Agent Sitwell about Zola's algorithm, Sitwell lists people that are being tracked, one of whom is Stephen Strange.

Look closely at the epitaph on Nick Fury’s grave. It reads: "The path of the righteous man. Ezekiel 25:17." Yep, that is the favourite quote of Samuel L Jackson’s character, Jules Winnfield, in 1994’s Pulp Fiction.

Despite taking place nearly seven decades after the events of the first film, The Winter Soldier manages to includes cameos from two of its characters – not just Peggy Carte but also Arnim Zola (played by Toby Jones) as well.

One of the best moments in the film is towards the end when the Russos have Jenny Agutter (that’s Jenny flipping Agutter from The Railway Children!) actually kick some ass. Okay, so it’s Black Widow in disguise, but it’s still a memorable sight to see Roberta Waterbury in action woman mode.

“Once again, Captain America delivers a delightful surprise and jostles with the first Iron Man film for the title of the best Marvel movie ever.” Daily Mirror

“Captain America: The Winter Soldier is perhaps the first Marvel movie that feels relevant to today: with its plot elements of surveillance, covert action, PTSD and remote targeting.” Den of Geek

“Captain America: The Winter Soldier neatly and entertainingly puts into motion some big changes in the Marvel universe, while still sticking to its own charms - no easy feat, but one fit for a hero.” MTV

“It's one of the best the genre has ever seen and takes Marvel's cinematic endeavors in a more complex, serious, and dramatic direction.” Forbes “In the first movie, an injection transformed wimpy Steve Rogers into strapping Captain America; similarly, this sequel gives the flagging comic-book movie an adrenaline shot of relevance. You've got to hand it to them.” The Guardian “It may climax with an overly formulaic splurge, but The Winter Soldier benefits from an old-school-thriller tone that, for its first half at least, distinguishes it from its more obviously superheroic Marvel cousins.” Empire

Next time... Guardians of the Galaxy 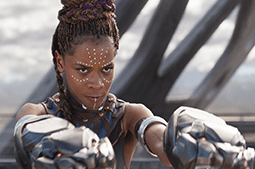