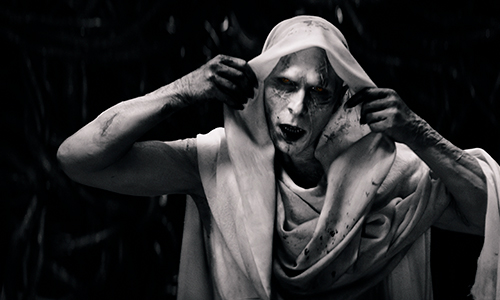 Marvel Studios' Thor: Love and Thunder has received rave reactions with much of the praise going to the movie's villain. Ex-Batman Christian Bale plays the fearsome Gorr the God Butcher who finds himself on a collision course with Thor (Chris Hemsworth) and Jane Foster/Mighty Thor (Natalie Portman) after he vows to destroy all gods.

Bale's performance was reportedly so creepy on the set (including an Aphex Twin tribute) that several scenes had to be deleted by writer/director Taika Waititi. However, Gorr's role in the storyline has also been singled out as a surprisingly sympathetic aspect of the new Marvel blockbuster. Reviews indicate that while we may fear Gorr, the movie goes a long way towards explaining why he's doing what he's doing.

As it turns out, Gorr is in good company in the Marvel Cinematic Universe (MCU). Ahead of Thor: Love and Thunder's release on 7 July, here's our list of eight unexpectedly sympathetic villains in the franchise, characters whose sense of evil is often complicated by grace notes of humanity.

Reasons for sympathy The father of Peter Quill/Star-Lord (Chris Pratt), the apparently benevolent, godlike Ego wants nothing more than to reconnect with his son in the wake of his human wife Meredith's death. (She was also Peter's mother who gifted him with the Awesome Mixes.)

But for all his talk of paterfamilias, Ego is revealed to be the agent of his late wife's destruction, and he actually harbours megalomaniacal tendencies. So, his warmongering attitude pops him at the bottom of this list, despite the iron-clad love he exhibits for Peter.

Reasons for sympathy How can the so-called Mad Titan, the villain responsible for extinguishing 50% of all life in the universe, possibly be sympathetic? It's a testament to Josh Brolin's performance, not to mention the writing and direction throughout the Infinity Saga, that Thanos is shaded with more nuance than we expect.

Many of Thanos' most compelling scenes come via his interactions with his adopted daughter Gamora (Zoe Saldana), with his resultant actions becoming even more drastic and upsetting. In turn, the latter's conflicted attitude towards her adoptive father figure helps lend greater emotional complexity to the escalatingly spectacular Infinity Saga. Even when Thanos achieves his cataclysmic goal at the end of Avengers: Infinity War, when we see him sat alone on his porch, we sense that he's become isolated by his own nihilistic ambitions.

Reasons for sympathy The internecine dynamic between parents and children has fuelled many of the MCU's most gripping sequences. The buoyant and visually colourful Shang-Chi and the Legend of the Ten Rings builds its entire narrative around an intriguing father-son stand-off, as the eponymous martial arts warrior Shang-Chi (Simu Liu) must confront the legacy of his father Wenwu (the superb Tony Leung).

Wenwu, who now fashions himself as feared crimelord The Mandarin, only wants the best for his son, even if that means co-opting Shang-Chi into his new criminal empire. Leung's subtle performance shows how the death of Wenwu's beloved wife is a catalyst for grief transforming into violent retribution. However, in the end, even the powerful Wenwu finds himself manipulated by a greater force, reminding us that he is human after all.

Appears Makes many appearances throughout the MCU but his primary baddie role is in Avengers: Endgame (2012)

Reasons for sympathy The nefarious god of mischief Loki has been through so many multifaceted storylines that one ought to be reminded of how sympathetic he is. In the first Thor movie (2011), Loki realises he is not the biological son of Asgard ruler Odin (Anthony Hopkins), which prompts the former to undertake a power-hungry act of revenge. This, in turn, fuels the actions of the more overtly diabolical Loki in Avengers Assemble.

Since then, Tom Hiddleston's excellent performance has peppered Loki's love of subjugation with appreciably vulnerable undercurrents. This mostly manifests via Loki's interactions with his half-brother Thor as they circle around each other in a game of trust and mistrust. Loki, for all his wrongdoing, can't escape his family, and in the recent Disney+ series of the same name, he's finally confronted with the legacy of his actions, resulting in apparent contrition.

Played by Michael B. Jordan

Reasons for sympathy Insurgent villains always make for compelling antagonists, and Killmonger is a doozy. Thanks to Michael B. Jordan's charismatic performance, a stunning mixture of sympathy and revulsion, we're forced to contend with the less-than-savory undercurrents of the apparently idyllic kingdom of Wakanda. In turn, the character of Killmonger gooses the entire Black Panther movie, making it feel richer and more dynamic.

Killmonger manifests the sins of the fathers and arrives in Wakanda to cause disruption when he makes a legitimate claim to his birthright – in other words, the throne. The movie makes it clear that Killmonger is legitimately entitled to what he wants; it's just his actions that make him the bad guy, as opposed to his desires. This makes the final stand-off with Black Panther/T'Challa (the late Chadwick Boseman) all the more emotionally charged.

Appears in Made her first appearance in Avengers: Age of Ultron (2015) and most recently played a role in Doctor Strange in the Multiverse of Madness (2022)

Reasons for sympathy How can one truly hate a character who simply wants to be with her children? What makes the character of Wanda Maximoff/Scarlet Witch all the more tragic and sympathetic is that said children don't exist. They're a figment of her imagination, formulated after the traumatic events of Avengers: Infinity War when she glimpsed her partner Vision (Paul Bettany) brutally executed by Thanos.

The acclaimed TV show WandaVision picked up this thread, essentially turning each episode into a metaphorical reflection of Wanda's fragile mindset. Therefore, when it came to the Doctor Strange sequel, her demonic and violent actions were undercut with a genuine sense of tragedy. Even if we don't approve of Wanda's course of action, it's evident that she's crying out for help as she seeks out a multiverse where she can be with her kids.

Reasons for sympathy Well, how would you feel if you were plucked from the battlefields of World War II and co-opted to become a brainwashed super-soldier? The unsuspecting Bucky Barnes began life as a staunch ally of Steve Rogers/Captain America (Chris Evans) but appeared to die during the events of Captain America: The First Avenger (2011).

Roll forward to the present day as depicted in The Winter Soldier and Steve is horrified to discover that his one-time friend is now under the thumb of the nefarious Hydra organisation. Bucky's eventual transition from his Winter Soldier phase back to humanity has been one of the MCU's most compelling arcs.

Reasons for sympathy Zemo's character arc, completed within the parameters of one film, makes him arguably the most sympathetic MCU villain of the lot. A self-professed fan of the Avengers, Zemo was forced to watch in horror when the unchecked actions of the Avengers caused the deaths of his entire family. Zemo represents the worst kind of collateral damage; one can easily imagine taking his place in such an appalling situation.

Actor Daniel Brühl's understated performance is devoid of theatrics. Instead, he nimbly sketches a plausible scenario where a formerly good person has strayed from the path, to the extent that nothing aside from the complete destruction of the Avengers will suffice. Watching Zemo succeed in his scheme is especially chilling, especially when the film intercuts his exchange with T'Challa with the final battle between Captain America and Iron Man (Robert Downey Jr.). (On a more flippant note, Zemo also cuts a mean rug as the memes have made clear.)

Click here to book your tickets for Thor: Love and Thunder, opening in Cineworld cinemas on 7 July, and tweet us your most sympathetic Marvel villain @Cineworld.