Home Cineworld Blog Morbius: find out more about the Marvel character and book your Cineworld tickets 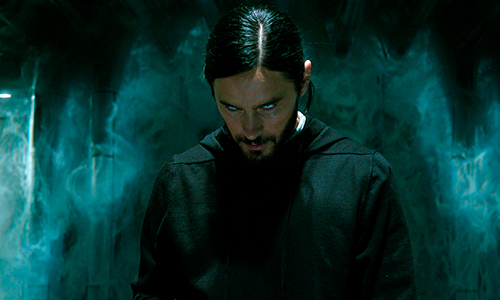 This year introduces a brand new big-screen character to the Sony Spider-Man Universe (SSMU) – although he’s not affiliated with Disney’s Marvel Cinematic Universe (MCU). Or is he?

Meet Morbius the Living Vampire, the hero of the upcoming comic book adventure Morbius. The film is the latest installment in the Sony franchise that started with the 2018 Tom Hardy movie Venom and continued with 2021's Venom: Let There Be Carnage.

Jared Leto stars as the title character – but who exactly is Morbius? Read on to find out more…

Morbius was created by writer Roy Thomas and initially introduced as an antagonist in The Amazing Spider-Man #101. However, Morbius proved so popular that he grew into something of an antihero, whose heroic yet flawed actions led to his very own comic series.

Michael Morbius is afflicted by a rare blood disease and experiences a very isolated childhood, raised by a single mother. Despite his struggles, Morbius grows to be an incredibly gifted biochemist and spends much of his time reading books and educating himself. In time, he goes on to become a highly respected and Nobel Prize-winning biologist, renowned for his contributions to both human and animal biology.

Whilst seeking a cure for his illness, Morbius injects himself with an experimental treatment, which involves both vampire bat DNA and electroshock therapy. Instead of a cure, he finds himself cursed with a much worse condition, where he mimics the powers and behaviour of vampires.

He comes to possess a wide range of superhuman powers such as speed and strength, as well as heightened senses, including echolocation and night vision, all of which are teased in the trailer for the Morbius movie.

Who stars in Morbius?

Directed by Daniel Espinosa, responsible for 2012’s Denzel Washington-Ryan Reynolds thriller Safe House, the film stars Dallas Buyers Club Oscar-winner in the main role. Of course, Leto has past form in the comic book realm, having controversially portrayed the Joker in DC’s critically-derided Suicide Squad. Fingers crossed he can actually put his stamp on the character of Morbius.

Is the Morbius movie connected to the Marvel Cinematic Universe?

As already mentioned, the Morbius movie operates in a different realm from the Disney-distributed MCU franchise. However, the latest trailer showcases Keaton as Adrian Toomes aka Vulture, which opened up a wealth of questions about this film’s connection with the MCU.

After all, we last saw Keaton’s nefarious villain in prison at the end of 2017’s Spider-Man: Homecoming, the MCU movie that acted as Tom Holland’s solo Spider-Man movie debut. Will Morbius meet Toomes while incarcerated?

Not only that, in an earlier trailer, we see Leto’s title character walk past an image of Spider-Man, on which is graffitied the word ‘murderer’. This is a clear allusion to the climax of last year’s MCU blockbuster Spider-Man: Far From Home, in which the identity of Holland’s web-slinger was leaked to the wider world, at the same time that he was implicated in the death of Quentin Beck/Mysterio (Jake Gyllenhaal).

When is Morbius released in Cineworld?

Will this forge a connection between the separate Sony and Disney superhero universes? And will Leto finally get a chance to sculpt a memorable comic book character? We'll find out soon enough when Morbius is released on 31st March.

Don't forget that you can now book your Cineworld tickets for Morbius.