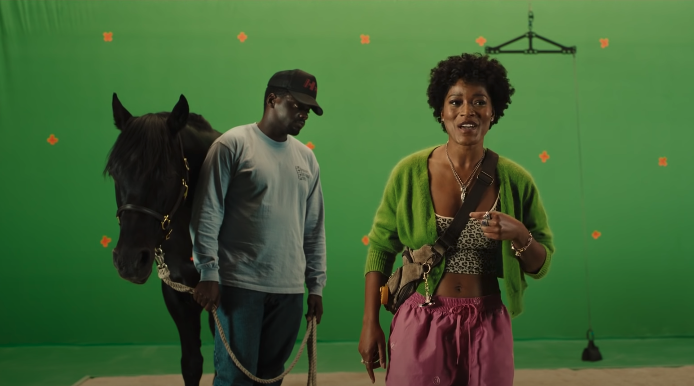 The first trailer for Jordan Peele's Nope has crept its way online, so can we get a 'yep' to mark this exciting moment? The Oscar-winning director of Get Out and Us returns with his mysterious new project, and the trailer, reiterated at the recent Super Bowl, refuses to give away any answers. So, we've stepped into the breach and listed several of our most pressing questions.

What is Nope about? Scroll down for our take on the eerie-looking chiller.

1. Is it about the history of whitewashing in Hollywood?

Get Out took aim at the spectre of liberal racism, and after the Golden Globes classed the movie in a comedy category, Peele subsequently described it as "a documentary". His second feature, Us, expanded its gaze to explore the notion of an ostracized, exploited underclass, and the resultant horror that spelled chaos for America as a whole.

Nope's trailer begins with a reference to an early piece of film footage: a man of colour riding on horseback. As KeKe Palmer's character explains, this is one of the earliest images in the history of motion pictures, yet it has been overlooked or, more pertinently, ignored outright. By taking swipes at the systemic whitewashing within Hollywood itself, Peele finds a new angle of attack and will no doubt find plenty of opportunities for mordant meta humour.

How this feeds into the overall narrative is anyone's guess at this stage. The characters played by Palmer and Daniel Kaluuya (now an Oscar winner in his own right) are Hollywood horse trainers at the Haywood Ranch, and the former reveals that the rider in question was her great-great-great-grandfather. So, in the vein of Get Out and Us, we're likely to get a cross-spectrum between the personal and the political. Peele's movie is among a clutch of films (The Harder They Fall; Concrete Cowboy) looking to re-align the traditional narrative of the white cowboy, and we can expect the end result to be deliciously ironic, not to mention very creepy.

2. Is it an alien invasion movie?

The images of broiling nighttime clouds (with strange bunting hanging out of the end) bring to mind Steven Spielberg's Close Encounters of the Third Kind, and there are also overtones of M. Night Shyamalan's Signs. Despite the apparent presence of an inter-species fist bump (see the GIF below), are we dealing with a straightforward extraterrestrial invasion flick?

By now, we're well aware that Peele loves to subvert expectations, and some throwaway dialogue might indicate the presence of something mystical. Kaluuya's character questions the possibility of "a bad miracle" and what that could mean. Has someone in the movie possibly invoked evil from the heavens? Many online have also speculated that the title 'Nope' is an acronym for 'Not Of Planet Earth.' Could that be true? And is that another clear indication that we're dealing with an alien threat?

What we do know is that the movie is lensed by Hoyte van Hoytema, the director of photography responsible for the astonishing Christopher Nolan spectacles Interstellar, Dunkirk and Tenet. We can, therefore, expect this to be the most arresting and visually polished of Peele's movies so far, one that should possess an appropriately epic sweep within the parameters of the storyline.

3. Is it about the Skinwalker Ranch in Utah?

On that note, some people online have speculated that the story centres on the mysterious Skinwalker Ranch. The place exists in real life, and was once a Navajo reservation for Native American tribes. The word 'skinwalker' comes from an ancient Navajo demon, one with the ability to transform into an animal. Despite having passed through numerous hands, one thing has remained consistent throughout the Skinwalker Ranch's history: it's reputed to be a hotbed of UFO activity, not to mention other supernatural occurrences.

Is Peele about to invoke the pain and horror that was wrought on America's indigenous peoples? Maybe the latent historical anguish contained within the history of the Skinwalker Ranch has manifested in the form of the mysterious cloud? As we said, there may be a suggestion of demonic incantation, of someone having resurrected an ancient spirit, one destined to wreak terror on mankind. Such a development would be in keeping with the Peele horror brand, one that mixes socio-political commentary with genuine menace. There's a credited role for motion-capture actor Terry Notary (Planet of the Apes), so are we about to see him perform a fully CGI transformation into something truly terrifying?

4. What does this shot signify?

We get a quick glimpse of a woman with a skeletal face – has this been brought about by the apparent extraterrestrial menace? Might Peele be about to walk into the realm of David Cronenberg-esque body horror? 5. Who is Steven Yeun playing?

Having graduated from The Walking Dead, Yeun is now one of our favourite actors. He was spellbindingly creepy in the South Korean thriller Burning and affectingly moving in the acclaimed Minari, for which Yeun was Oscar nominated. The fact that he has a starring role in the new Jordan Peele movie is, therefore, very exciting, but we have next to no information as to who he's playing. He appears to be portraying a cowboy, one with a scar on his face, so does his character play into the movie's apparent critique of America's smalltown cowboy culture and history?

6. Is KeKe Palmer about to steal the show?

Peele has a background in comedy with Keegan-Michael Key, and his movies are subsequently as funny as they are scary. In Get Out, it was Lil Rel Howery who stole the show as Daniel Kaluuya's on-screen friend, one who gets to the bottom of the film's diabolical body-swap conspiracy. In Us, Winston Duke helped mediate the horror with his spot-on performance of the well-meaning but clueless dad attempting to navigate the emergent doppelganger threat.

On the basis of the Nope trailer, rising star KeKe Palmer is the amusingly believable surrogate for the audience, reacting as we would do and attempting to get the heck out of dodge. Might she provide the comic relief in the midst of the latest must-see Peele chiller?

Nope is released on 22nd July. What did you spot in the trailer that we didn't? Let us know @Cineworld.