Home Cineworld Blog Oscars 2020: 5 memorable acceptance speeches to get you excited for this year's ceremony

Oscars 2020: 5 memorable acceptance speeches to get you excited for this year's ceremony

Fittingly, for an evening that celebrates the very pinnacle of film talent, Oscar night proves time and again to be a rather reliable source of drama.

Beyond the A-listers, the outfits and, of course, the awards themselves, much of the priceless entertainment comes from the acceptance speeches. While winning an Academy Award is one thing, going up on stage to receive it is another thing entirely. For recipients of the famed gold statuette, a place in the history books beckons.

However, with so many different emotions running wild, with so many things to say yet so little time to say them in, and with the eyes and ears of the world attuned to every facial expression and syllable, accepting an Oscar, it seems, can prove just as challenging (and just as memorable) as being crowned victorious in the first place.

With the 92nd Academy Awards ceremony just weeks away, we’re delving into the Oscars of yesteryear to bring you five of the most unforgettable acceptance speeches.

They’re often political and almost always emotional, but acceptance speeches are sometimes memorable simply because of what they represent. In the case of Hattie McDaniel, being awarded Best Supporting Actress for her role in Gone With the Wind at the 12th Academy Awards marked a moment of history: becoming the very first African American to win an Oscar.

At a time of great racial injustice (exemplified by the fact that Georgia race laws at the time prohibited McDaniel from attending the premiere of her own film), ) her win was all the more impressive. McDaniel also faced criticism from the African-American community itself for playing a maternal house servant (a character they cited as conforming to racist stereotypes).

Despite all that was stacked against her, McDaniel’s speech rebuffed any ill-feeling whatsoever and was instead imbued only with inspiring humility and delivered with touching eloquence. “I sincerely hope I shall always be a credit to my race and to the motion picture industry. My heart is too full to tell you just how I feel, and I say thank you.”

Marlon Brando’s acceptance speech at the 42nd Academy Awards will forever be remembered because he never gave a speech at all. In fact, he wasn’t even there to receive the Best Actor gong. His role, of course, was feared mafia boss Don Vito Corleone in Francis Ford Coppola’s seminal crime epic The Godfather.

Instead, Brando asked Apache Native American Sacheen Littlefeather (then President of the National Native American Affirmative Image Committee) to attend the ceremony in his place. On Brando’s behalf, she informed the audience of his refusal to accept the award in protest of the treatment of American Indians at the hands of the film industry.

After being met with a flurry of both boos and cheers, Littlefeather finished her speech with a sincere, heartfelt message of hope; “I beg at this time that I have not intruded upon this evening and that we will in the future, our hearts and our understandings will meet with love and generosity”.

There’s keeping things brief – and then there’s Joe Pesci speaking at the 1991 Oscars. In what must be the shortest acceptance speech in the history of the Academy Awards, Pesci, upon winning the Oscar for Best Supporting Actor for Goodfellas, took to the stage to deliver a simple “It was my privilege. Thank you” before departing again.

It proved short, sweet and rather refreshing, on an evening when so many always feel the need to comment on important, pertinent issues, or get lost in a barrage of verbal gratitude. Pesci’s speech made a point of getting straight to the point. As such, it goes down as one of the greatest. A wiseguy indeed. Given Pesci is in contention again this year for The Irishman, we wonder if he can make his potential acceptance speech even shorter?

Sometimes, it seems that one can be so engulfed in joyful feeling that almost all notion of coherent speech simply goes out the window. That was quite clearly the case in 1999, when Italian filmmaker Roberto Benigni won the Oscar for Best Foreign Language Film and Best Actor for Benigni for Life is Beautiful, a comedy-drama set amidst the terrors of a Nazi concentration camp.

When it came to Best Actor, Benigni’s physical exuberance (including leaping across the seats) and nonsensical speech perfectly encapsulated the wave of emotion that had quite evidently washed over him. With English not being his first language, Benigni expressed his inability to truly express how he felt before bestowing upon the audience one of the most bizarre lines in Oscar history: “I would like to be Jupiter and kidnap everybody and lie down in the firmament making love to everybody”. In its strangeness, however, it was, and remains, infectiously uplifting.

Holding back tears, her words carried everything one could possibly want from an Oscar speech: heart, humour and a hefty helping of humility. In little over two and a half minutes, she had lauded fellow nominee Glenn Close (who, even after seven nominations, remains on the hunt for her first Oscar), paid tribute to previous winner Frances McDormand, threw adoration the way of Lady Gaga, and even blew a raspberry when told to wrap things up.

She might have won the award for portraying a historical figure, but Olivia Colman won the hearts of millions simply by being herself, proving she is royalty both on, and off, the big screen.

The 92nd Academy Awards get underway on the 9th of February. Which movie will emerge as the front runner? Tweet us your Oscar tips (and favourite speeches) @Cineworld.

George Nash is a writer who blogs for Cineworld as part of our news team. Follow him on Twitter. 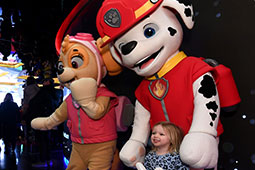