Home Cineworld Blog She Said: go behind the scenes of this week's powerful new drama release 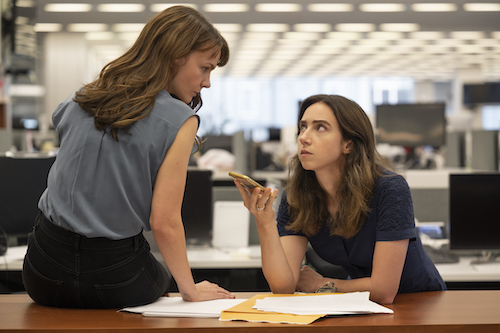 The movie pivots around the groundbreaking investigation surrounding Harvey Weinstein, the movie mogul whose litany of harassment and misdemeanour stretched back decades. Mulligan and Kazan portray the dedicated New York Times reporters Megan Twohey and Jodi Kantor who helped instigate the fall of a Tinseltown behemoth while also furthering the essential conversation about the treatment of women in the movie industry.

The film, directed by Maria Schrader, has drawn comparison to journalistic classics such as All the President's Men. It explores what happens when tenacious professionals put everything on the line for the sake of the greater good and wider social awareness. Buoyed by typically commanding performances from its leads (the strong cast also includes Ashely Judd as herself, plus Patricia Clarkson and Jennifer Ehle), it's bound to make you think.

Go behind the scenes of She Said in the following video as the filmmakers stress the importance of this watershed moment in movie history.

She Said is on release at Cineworld from November 25. Check out the trailer for a preview of this emotionally-charged drama.