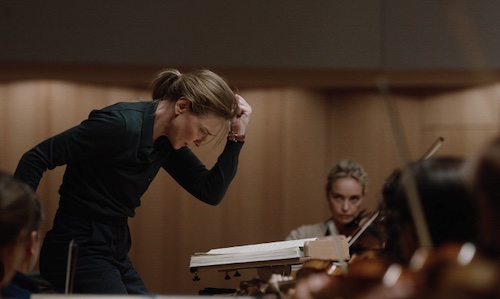 Cate Blanchett has landed her fourth Golden Globe for the scintillating drama TÁR. Blanchett is on magisterial form as the eponymous Lydia TÁR, the fiercely talented yet arrogant conductor of a Berlin orchestra who serves as the agent of her own destruction.

It's expected that Blanchett will pick up an Oscar nomination on January 24th. Will she win her third Academy Award on the big night in March? If so, it would place her among fetêd company including the likes of Meryl Streep, Ingrid Bergman, Frances McDormand and Katharine Hepburn (whom Blanchett played, to Oscar-winning effect, in Martin Scorsese's The Aviator).

TÁR is embalmed in the rich history of classical music performance. The title character is preparing to conduct Mahler's notoriously complex Fifth Symphony and all the way through the movie, she drops highfalutin references to her influences and inspirations.

However, did you spot the following three musical 'Easter Eggs' that are casually name-dropped in the film?

Oscar-winning composer Guðnadóttir (Joker) is an important figure in TÁR's aesthetic landscape. She was brought onto the project at the insistence of writer-director Todd Field as he wanted to gain an accurate woman's perspective on the industry. Guðnadóttir is verbally cited early on in the film itself, named as one of the women who is breaking down the glass ceiling in the realms of composing and conducting.

"I had a lot of meetings with Todd in Berlin about the tempo of the characters, and we set a BPM for different characters and different scenes," Guðnadóttir told Document Journal. "We tempo-mapped the whole film. He wanted to approach the story as a musical process.

"My second job was to write the music that [Cate] was writing in the film. In TÁR, you never hear the finished version of the music she is writing because, again, this film is all about the process of making music. It’s really going into the finer details of what it means to write music. Unless you’re a musician, it’s a process you’re normally not privy to. But it’s probably the aspect that I find the most fascinating.

"The third job is bringing us to the realm that’s so present in the film—this kind of subconscious, otherworldly realm, the place where you’re unsure if it’s real. Because the day-to-day life of this story happens in orchestra rehearsal, it was really clear that the music couldn’t be of that world. It had to be something other than an orchestra score.

"It had to be otherworldly, and also in the space of almost not being there—the score is pretty much inaudible. It’s like you have a feeling of a ghost in the room—you’re probably not going to hear it, but you will feel it."

Listen to a cue from Guðnadóttir's score in the video below.

Pioneering composer Goldsmith is renowned as one of the greatest voices in film music. From the Oscar-winning Gregorian choral chants of The Omen to the propulsive orchestral-synth rhythms of Total Recall, Goldsmith's capacity for innovation was revered.

However, that doesn't stop Tár throwing shade at him during a Juilliard lecture with a group of students. Prompted by an escalatingly tense (and largely one-sided) discussion with a trans student about cancel culture and AntiSemitism, Tár claims that Jewish composer Goldsmith wasn't averse to "ripping off" French composer and alleged AntiSemite Edgard Varèse. In particular, Tár cites Goldsmith's celebrated, atonal Planet of the Apes score as a piece of hackwork.

Tár's patronising attitude in this sequence comes back to haunt her later on when the altercation with said student is revealed to have been filmed and leaked online. This is one of the many things that initiates her spectacular downfall.

Want to hear more from the score that gets Tár's back-up? Here's the famously discordant and creepy 'Hunt' passage from Goldsmith's Planet of the Apes that blew open people's perceptions of film music.

Tár is recording and releasing her interpretation of Mahler's Fifth Symphony via the illustrious label Deutsche Grammophon (the same label on which Hildur Guðnadóttir's score has been released). At one point, Tár is asked to find the right pose and lighting for her eventual album cover and in a dryly amusing aside, she flips through an assortment of celebrated classical musicians in a variety of stilted poses.

One of the people whom she cycles past is the noted conductor, and director of the Los Angeles Philharmonic, Gustavo Dudamel. He's perhaps best known in mainstream circles as a collaborator with John Williams, and indeed Dudamel conducted the opening titles for Williams' score for Star Wars: Episode VII - The Force Awakens.

Here's a stirring clip of Dudamel leading the Simón Bolívar Symphony Orchestra of Venezuela in a Barcelona performance of Beethoven Symphony No.9.

TÁR is now on release at selected Cineworld cinemas nationwide.