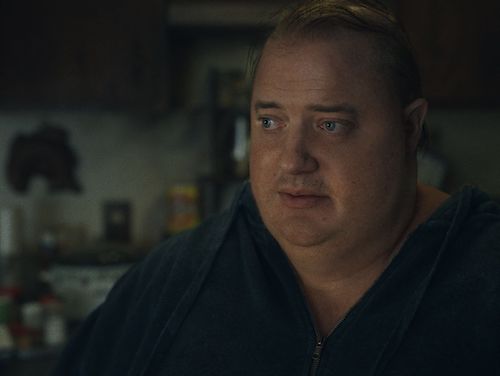 Have you caught our Oscars 2023 coverage yet? We're starting to build towards the 95th Academy Awards in March next year, and top of the list as far as Best Actor predictions go is Brendan Fraser.

The one-time star of The Mummy franchise (and George of the Jungle, lest we forget) stuns in his comeback role in The Whale. Darren Aronofsky's drama has been generating a lot of attention since its Venice Film Festival premiere back in September, with opinion sharply divided as to its dramatic merits. Opinion is, however, magnanimously positive as to Fraser's star turn, and many are tipping him to win the Best Actor trophy.

Fraser plays Charlie, the morbidly obese and house-bound English teacher who is seeking a reconciliation with his estranged daughter Ellie (Stranger Things' Sadie Sink). The movie is adapted from Samuel D. Hunter's play of the same name and takes place almost entirely within the confines of Charlie's apartment, amplifying the sense of claustrophobia and melancholy surrounding the story's central character.

Aronofsky reins in the visual flourishes that have marked his films such as Requiem for a Dream, The Fountain and Noah. Instead, he evokes more of the downbeat sadness that marked out his 2008 drama The Wrestler, which sported a tremendous comeback performance from Mickey Rourke. Reviews for The Whale indicate that Fraser's achievement is on the same level, by turns heartbreaking, wryly sardonic and utterly human.

The Whale co-stars Hong Chau, Samantha Morton and Ty Simpkins and is released in the UK on February 3, 2023. Check out the first trailer below.