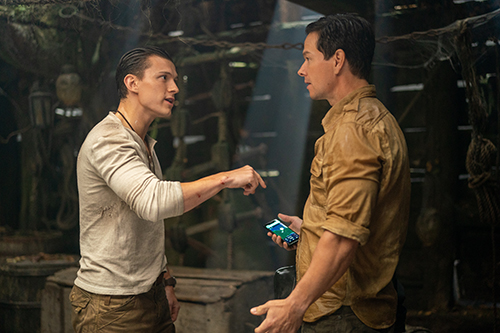 You can now book your tickets for Uncharted in Cineworld. Tom Holland plays the daredevil PlayStation adventurer Nathan Drake in this long-awaited adaptation of the hit Naughty Dog series. Scroll down to find out more.

1. It's based on the smash-hit game series

If you're a PlayStation gamer then you will need no introduction to Uncharted – chances are it's devoured hours, days, if not months and years of your time. Created by Amy Hennig for developer Naughty Dog, the series unfolds as a rip-roaring adventure based on the exploits of Nathan Drake. He's essentially Indiana Jones in all but name, traversing the globe to find hidden antiquities, all the while battling diabolical enemies and deadly booby traps.

Since Uncharted made its debut in 2007, the series has grown to become one of the most successful of all time. Three sequels have been made, the most recent of which was released on the PlayStation 4. There have also been spin-offs for the PlayStation Vita, not to mention card games and more. Nathan Drake isn't the only playable character in the series – 2017's Uncharted: The Lost Legacy throws it over to Chloe Frazer, another fearless adventurer.

So, where does this leave the movie?

First thing's first: the Uncharted movie has got a heavyweight lead duo. Spider-Man himself, Tom Holland, joins Transformers' Mark Wahlberg to bring the Uncharted mythology to the big screen. Holland is playing Nathan Drake and Wahlberg portrays his mentor, Victor Sullivan, another regular character in the games.

In this iteration of Uncharted, Drake claims to be a descendant of Sir Francis Drake, the famed Elizabethan explorer. We can't wait to see how themes of generational legacy play out amidst the action-packed world of Uncharted.

Also in the cast: Pain and Glory's Antonio Banderas, who appears as the villain.

3. Tom Holland has got himself ripped for the role

Holland's background in athletics and ballet (he played Billy Elliot on-stage) helped him secure the role of Spider-Man. However, he had to one-up his physique to portray Nathan Drake, and the results are self-evident on Holland's Instagram page. He jokingly says his motivation comes from co-star Wahlberg, no stranger to getting bulked up for roles, as the likes of Pain & Gain attest. 4. It's been a long time coming

Development hell? The Uncharted movie has rewritten the rulebook on it. Initial word of the Uncharted movie dates back to 2008, and Firefly actor Nathan Fillion soon emerged as a favourite to play Nathan Drake. In fact, a fan film was made in 2011 with Fillion (who had long championed himself) in the part. This received praise from Naughty Dog executives, and you can check it out below. Ultimately, however, Fillion's casting came to nothing with the news that Holland and Wahlberg had secured the lead roles.

Various directors had circled the project since 2009, including American Hustle's David O. Russell, with just as many scriptwriters getting involved. (One of these was The Act of Killing's Joshua Oppenheimer.) Wahlberg's involvement first became apparent in 2010: initially pencilled to take on the role of Nathan Drake, he gave an interview to MTV showing his enthusiasm for O'Russell's take on the material. Wahlberg claimed that Robert De Niro and Joe Pesci were going to appear, but O'Russell walked in 2011, around the same time the Nathan Fillion short movie turned up. Later on, Wahlberg ceded the Drake role to Holland, and he eventually took on the part of Victor Sullivan.

Producers Avi Arad, Charles Roven and Alex Gartner then attempted to enlist The Illusionist's Neil Burger, but he left the project in 2012 to work on the Divergent series. Over the years, various creatives declined to work on the project, including Seth Rogen (who was offered the chance to write the screenplay) and Chris Pratt (who turned down the role of Nathan Drake). Multiple losses soon followed: Joe Carnahan (The Grey), Shawn Levy (Night at the Museum) and Travis Knight (Bumblebee) all departed for various reasons, before Venom's Ruben Fleischer was confirmed as late as February 2020. And the curse of Uncharted struck again when principal photography fell foul of the COVID-19 pandemic. Fortunately, the movie is now on track to reach us in February 2022.

Of the opinion that Holland is too young for the role of Nathan? Well, the filmmakers have attempted to get around this by deliberately pitching the movie as a prequel/origin story. This change dates back to 2017: Deadline reported that Sony head Tom Rothman was so impressed with Holland's Spider-Man: Homeconing performance, he demanded the script be retooled to fit a younger Natham Drake. (This was back when Shawn Levy was attached as director.)

Of course, this changes the impetus of Nathan Drake somewhat. No longer will he be the enjoyably jaded, somewhat world-weary adventurer, but more of an eager young buck. Will the film, therefore, be able to stay true to the spirit of the franchise? That remains to be seen.

6. It's got Venom and Iron Man creatives involved

As mentioned, Venom and Zombieland director Ruben Fleischer is now at the helm, while the script is being tackled by the Iron Man duo of Art Marcum and Josh Holloway. Clearly, this is a team that knows a thing or two about conjuring quip-happy, audience-friendly blockbusters, so fingers crossed Uncharted is in the right hands.

7. Behind the scenes videos and clips give a taste of the stunts and action scenes

Check out the following extracts for a glimpse at the movie's action sequences, which aim to bottle the same giddy thrill we got when playing the games. Uncharted arrives on 11th February 2022. The movie will be distributed in a mixture of widescreen and IMAX – all the better for becoming enveloped in Nathan Drake's world. Planning to watch it? Let us know @Cineworld.

The Batman: watch a new clip where The Riddler attacks Bruce Wayne