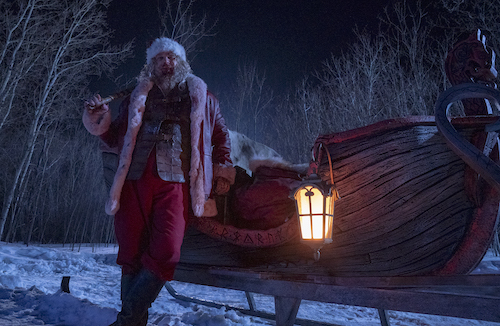 Violent Night puts the slay in sleigh this festive season as David Harbour's Saint Nick goes postal on a host of naughty renegades. Frankly, who could resist that gloriously anarchic Christmas pitch?

The Stranger Things star plays the original Father Christmas who has now become a boozy wastrel. At the same time, a young girl is preparing for Christmas with her family when their lavish home is invaded by a group of violent mercenaries.

Who should then come down the chimney but Santa Claus himself? Harbour's iteration of the character swiftly taps into his berserker rage as he takes the concept of the naughty or nice list to the limit, deploying candy canes and festive lights with grisly abandon.

Very much in the spirit of Gremlins (with more than a dash of Taken and Bob Odenkirk vehicle Nobody thrown in for good measure), this is highly recommended for those who love their Christmas movies acidic and slightly venomous in tone.

Go behind the scenes in the following clip and discover why, against all the odds, this particular Santa is set to win your heart at the close of 2022.

Violent Night is released at Cineworld cinemas on December 2nd.