If there's one thing we can all do with at the moment, it's kindness.

While such qualities may seem in short supply, today is, in fact, World Kindness Day. And we're celebrating with our Cineworld blog list of seven classic movies where compassion saved the day. Scroll down to discover our choices.

James Stewart was the patron saint of compassionate movie stars. He embodied the notion of the upstanding American everyman for decades, showing that no matter how downtrodden one becomes, it can always be overturned with a dose of humility and decency.

The first proper sign of this came in Mr. Smith Comes to Washington, Stewart's second collaboration with director Frank Capra. The two men shared the same values, always believing that goodness could puncture through the noise. This Oscar-winning drama casts Stewart as Jefferson Smith, the unassuming senator installed by machiavellian Washington power players to essentially do their bidding.

However, through sheer good-natured tenacity Smith stands his ground. He vows to get a national boy scouts camp written into legislation, which threatens scandal and political disgrace, causing Smith to filibuster to the bitter end. Stewart's sweaty, determined gaze reminds us that Smith, despite his newly appointed standing in Washington, is not about to lose sight of his roots, nor lose sight of the greater good. It's an inspiring story and, as it turns out, one that was years ahead of its time.

It turns out Mr. Smith Goes to Washington was the mere warm-up act for the real James Stewart/Frank Capra masterpiece. It's a Wonderful Life was their first collaboration in the wake of World War II, a conflict in which Stewart had served. Consequently, the movie's sense of idealism possesses more of a hard-fought, embittered air, the war having shattered and devastated both men.

The movie is, at its heart, still invested in the notion of kindness. Getting to that stage, however, is a journey fraught with disappointment and disillusion. Stewart's anguished small-town businessman George Bailey is contemplating suicide, only for an angel to intervene and show him the truly wondrous splendour of his apparently unremarkable life. The movie instills lessons of self-reflection, appreciation and community spirit, leading to possibly the most moving climax in cinema history.

By tempering its sugary sweetness with just enough pragmatism and reality, the movie's cathartic triumph feels all the more genuine. Not the fluffy Christmas film dismissed by many, It's a Wonderful Life is a profound statement about the slow, steady march towards appreciation and love.

The fact that Robin Williams is no longer with us still hurts deeply. Not just a fiendishly funny stand-up comic and movie actor, he was also a fine dramatist, as seen in the likes of Good Will Hunting (for which he won an Oscar) and Christopher Nolan's Insomnia.

One of his greatest achievements is Dead Poets Society, directed by Peter Weir. The filmmaker coaxes a performance of remarkable sensitivity and understatement from Williams, here playing a dedicated English teacher who realises his students have more to learn than just academic theory. His character, William Keating, clashes with the stuffy conventions of his 1950s prep school, but in turn he inspires a generation of young students to think for themselves.

The rousing final sequence is a real tear-jerker, in which Keating has paid the price for his job but discovers his pupils have responded in kind. As the boys (a young Ethan Hawke among them) stand on the desk, reciting Walt Whitman's 'o captain, my captain', it's a reminder that kindness and humility can radiate across the generational divide.

Selecting a single Disney movie for World Kindness Day is an incredibly difficult task. We've opted for one of the crown jewels in the studio's renaissance period, which started with The Little Mermaid in 1989 and stretched throughout the 1990s. Beauty and the Beast is a timeless story precisely because its themes of kindness, love and turning the other cheek are archetypal, having resonated with humanity from the story's original fairy tale incarnation through to the various movie iterations.

Disney's take on the myth is resplendent in gorgeous animation and the Oscar-winning song/score combination from Alan Menken and Howard Ashman. Yet at its centre, the narrative sends a powerful message of not judging a book by its cover – appropriate when we consider that heroine Belle is a devoted bookworm. Her relationship with the rampaging beast, an arrogant prince turned ferocious monster, begins on a note of terror. But her inherent curiosity and decency soon begin to break down his barriers, resulting in a classic "tale as old as time" and a statement that good, not evil, will win the day.

Michael Bond's beloved Paddington stories were treated to a wonderful adaptation from director Paul King. Initially, we were unsure: how would this irresistibly British and wry story of a Peruvian bear adapted by the Brown family translate onto the big screen? Would the humour and character intricacy prevail?

The answer was a resounding yes. In fact, Paddington (and its equally brilliant sequel in 2017) went even further than we dared imagine, putting forth a lovely note of solidarity and inclusiveness at a time when such things appeared lost. The Browns' acceptance of the lost Paddington (voiced brilliantly by Ben Whishaw) signals that we've nothing to fear, and everything to gain, from an acceptance of other cultures.

It is, centrally, an amusing and spirited story of a talking bear in London. But deep down, Paddington reminds us that to be kind is a very good thing indeed.

This tender and uplifting drama is adapted by Jack Thorne (His Dark Materials) from R.J. Palacio's book of the same. The narrative filters different viewpoints, all centering around young Auggie (Room sensation Jacob Tremblay) who, despite his facial disfigurement, radiates kindness and empathy.

Auggie's parents (played by Owen Wilson and Julia Roberts) alternate between a protectionist and a pragmatic attitude. They realise that their son's feelings need to be upheld, yet he eventually needs to go to school and face the wider world. Auggie's experiences at high school form the bulk of the narrative, streaked with equal amounts unpleasantness and inspiration.

However, the main character's air of kindness is shown to have a healing effect on all those around him, both inside and outside the family orbit. It's a powerful message that's delivered quietly yet emphatically, not least through Tremblay's performance.

Oscar winner Tom Hanks is considered to be the 21st century reincarnation of James Stewart. Hanks was, therefore, perfectly cast as iconic TV host Fred Rogers in this critically acclaimed biopic. Rogers encouraged principles of decency, kindness and creativity through his long-running show Mr Rogers' Neighborhood. And Hanks' casting creates perfect synergy: we have the star of Forrest Gump aligning with an unlikely, humble hero of American pop culture.

With his gently drawling voice and almost childlike mannerisms, Hanks' take on Rogers seems almost too good to be true. But that's the point: the movie is about a cynical journalist (Matthew Rhys) profiling the wholesome TV personality, and in the process confronting his own skepticism. Why should a resounding air of kindness make someone seem like they're from another planet? And what does it say about modern culture that we're suspicious towards such people?

These questions steadily bubble up through Hanks' Oscar-nominated performance and Marielle Heller's direction, before the movie finally envelops us in a cloak of warmth.

We want to know what movies you'll be watching on World Kindness Day. Tweet us your essential playlist @Cineworld. 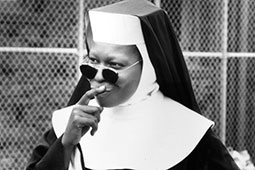