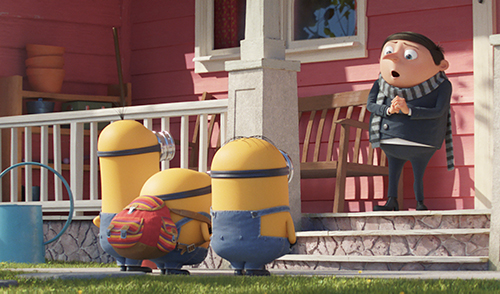 Get ready, because Gru and the Minions are taking over a Cineworld near you. Animated blockbuster Minions: The Rise of Gru, to be released on July 1, unleashes all manner of hilarious comic chaos in time for the summer holiday season.

Steve Carell's loveably nefarious Gru gets his own, 1970s-themed origin story in this follow-up to the hit Minions movie. Gru desperately wants to join the wonderfully wicked Vicious 6 villain's collective, and, of course, the ever-loyal Minions are along for the ride.

It's one thing to watch the Minions' latest anarchic escapade, but what does it mean to feel their comedic chaos from your Cineworld cinema seat? We simply had to find out, so we asked Cineworlders to share their reactions from the Minions 4DX screening.

What is 4DX? Exclusive to Cineworld cinemas in the UK and Ireland, 4DX is a uniquely groundbreaking experience that is perfect for a comedy onslaught like Minions. In 4DX, your seat moves and vibrates, reacting to the frenetic on-screen action, making it feel like you're there alongside Gru's hilariously hapless sidekicks. From planes to mopeds to secret lairs, just try to hang on as the mayhem speeds ahead!

In addition, scents including wind, water and rain, plus sensations like smoke and snow, craft an added layer of sensory augmentation, further enveloping you in the blizzard of chaos that is the world of the Minions. But don't just take our word for it. Here's what Cineworlders had to say about their uniquely thrilling Minions experience.

Are you prepared to take the 4DX journey with Gru and the gang? Then click here to book your 4DX tickets for Minions: The Rise of Gru, to be released on July 1.