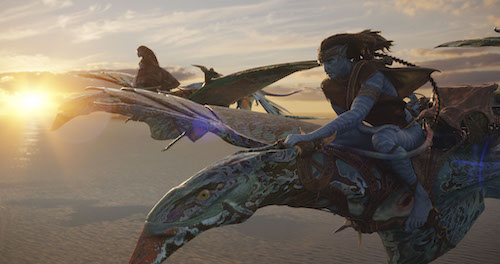 We're rounding up the blizzard of must-see movies hitting Cineworld screens this December. As 2022 rolls to a close and the curtain prepares to come down on an epic year of movie-going, there's still plenty more to come.

Scroll down to discover what's on and when.

David Harbour plays a sledgehammer-wielding Santa Claus in this darkly comic and ferocious onslaught from the makers of Atomic Blonde and Nobody. Season's beatings are in order as Harbour's disillusioned Saint Nick finds his faith restored while saving a young girl and her family from a gang of violent mercenaries.

It's head-cracking, as opposed to kissing, under the mistletoe as the likeable star of Stranger Things puts an irreverent spin on Father Christmas. Genre fans will be delighted with the bloody and hilarious throwbacks to Christmas classics such as Die Hard and Home Alone.

Click here to book your tickets for Violent Night.

The festive season is the perfect time to catch up with this gem from Hollywood's Golden Age, which has now turned 80 years old. Casablanca is the oft-quoted masterpiece that cemented the peerless chemistry between screen legends Humphrey Bogart and Ingrid Bergman, spinning a tale of thwarted romance around the complex political backdrop of World War II.

Virtually every scene from Casablanca has passed into movie lore, from the terse instruction, "Play it again, Sam" to the fateful send-off at the airport. Bogart's taciturn yet sensitive charisma was never better displayed and there's a rogue's gallery of Tinseltown favourites in support including Paul Henreid, Claude Rains, Conrad Veidt and Peter Lorre.

Reclusive and controversial author Bruce Cogburn is drawn out of hiding by an obsessive fan, forcing the novelist to confront a past that he thought he could escape, and to account for events set in motion by his bestseller decades earlier.

Click here to book your tickets for The Infernal Machine.

A group of young girls makes a life-changing discovery in the woods in this poignant coming-of-age drama.

Director James Ponsoldt is a dab hand at such things, having spun gold from the acclaimed teen drama The Spectacular Now, although Summering skews somewhat younger, observing a loyal group of friends on the cusp of change.

Celebrated Belgian realist masters the Dardenne brothers return with their latest work, a typically incisive work boasting emotional clarity and acumen. The story follows a young boy (Tori) and a teenage girl (Lokita) who have left their home countries of Cameroon and Benin to make a new life in Belgium, during which time they must navigate a range of difficult and challenging experiences.

Click here to book your tickets for Tori and Lokita.

When five lovely young girls who hate studying hire part-time tutor Futaro, he guides not only their education but also their hearts. Time spent has brought them all closer, with feelings growing within the girls and Futaro. As they finish their third year of high school and their last school festival approaches, they set their sights on what’s next. Is there a future with one of them and Futaro?

Click here to book for the subtitled screening and here for the dubbed screening.

The Silent Twins is based on the story of siblings June and Jennifer Gibbons. The two girls communicated only with each other and parlayed this remarkable connection into their own works of fiction. Their real-life saga makes for captivating and uncomfortable viewing, buoyed by the strength of the lead performances.

Click here to book your tickets for The Silent Twins.

Two old friends from different sides of the cultural divide come together in this sensitive and understated drama. Screen veterans Dale Dickey and Wes Studi evoke years of history and unspoken regret as their characters spend a quiet evening amidst the spectacular backdrop of the American wilderness.

Click here to book your tickets for A Love Song.

Some 13 years after the release of the original Avatar, we're now headed back to lushly exotic Pandora for another sweeping adventure. Director James Cameron has pushed his use of pioneering performance capture CGI to the next level, fusing the approach with myriad complex underwater sequences to truly take our breath away.

As before, the romance between Sam Worthington's Jake and Zoe Saldana's Neytiri anchors the eye-popping spectacle. They now have a family of their own, but when their idyll comes under threat from an old enemy, Jake and Neytiri must take shelter with the aquatic Metkayina clan.

Expect a visually stunning expansion of the Avatar lore, mixed with a host of new and familiar faces. There are three more Avatar movies due after this one, so prepare to settle in for the next step in an epic ongoing saga.

Click here to book your tickets for Avatar: The Way of Water.

I Wanna Dance With Somebody (released December 26th)

Star Wars actor Naomi Ackie undergoes a startling transformation into Whitney Houston in this lung-busting biopic. The multifaceted life of the late diva, one marked by equal parts triumph and tragedy, forms the backdrop of the drama, scripted by Bohemian Rhapsody's Anthony McCarten.

Try to resist belting along to 'I Will Always Love You' as rising star Ackie embodies one of the greatest voices of the contemporary age of pop music.

Click here to book your tickets for I Wanna Dance With Somebody.

Want more? Don't forget to check out our list of Christmas 2022 movie releases at Cineworld.

How many movies are you planning to watch this December? With a Cineworld Unlimited membership, you can enjoy all these films, plus a lot more exciting benefits, from just £10.99 a month.