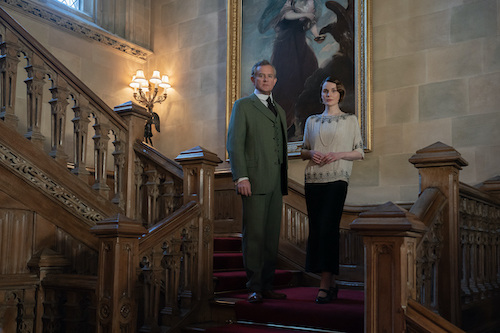 The May Bank Holiday weekend is almost upon us, and we've got a delightful plethora of big-screen delights for you to enjoy. Whether it's a family movie, comic book movie or something else entirely, we've got you covered.

Which tribe are you: upstairs or downstairs? It's time to decide because Lord Grantham's lavish country estate is once more open for business. Downton Abbey creator Julian Fellowes expands the back-story of the deliciously vitriolic Lady Violet (Maggie Smith) at the same time that a film production invades the Downton estate. Expect plenty of finery and soap opera shenanigans in this sequel to the first Downton movie.

Click here to book your tickets for Downton Abbey: A New Era.

2. The Unbearable Weight of Massive Talent (on release now)

After 30-plus years of eccentric, unorthodox portrayals, Nicolas Cage reaches his apex: playing a fictionalised version of himself. This surreal and amusing meta-comedy pairs Cage with Pedro Pascal's impassioned fan for a sly observation on the perils of fame, in which the divide between actor and star, real-life and fantasy becomes deliriously blurred.

Click here to book your tickets for The Unbearable Weight of Massive Talent.

Comedy veteran Sandra Bullock pairs with an endearingly lunk-headed Channing Tatum for this fast-paced comedy. Drawing on the legacy of Romancing the Stone, The Lost City showcases Bullock as a neurotic author who ends up stranded in a remote tropical jungle with her air-headed yet well-meaning cover model (Tatum). Their mission: to uncover a cache of hidden treasure before Daniel Radcliffe's nefarious villain gets there first.

With its combination of Bullock's familiar, tightly-wound mannerisms and Tatum's self-deprecating machismo, The Lost City ought to scratch that dormant comedy itch.

Click here to book your tickets for The Lost City.

4. The Northman (on release now)

Bare your chest and gather your clans for Robert Eggers' (The Witch; The Lighthouse) brawny blast of Viking mayhem. In the role he was surely born to play, Alexander Skarsgard is the outcast prince Amleth who vows vengeance against his uncle Fjolnir (Claes Bang). The latter murdered Amleth's father (Ethan Hawke), kidnapped his mother (Nicole Kidman) and seized the kingdom for himself. Now, grisly retribution is coming.

Adapted from the ancient myth that inspired William Shakespeare's Hamlet, The Northman promises remarkable, single-take action sequences and enough phantasmagorical visions to take the breath away. Anya Taylor-Joy, here reuniting with Eggers after The Witch, Bjork and Willem Dafoe round out the excellent cast.

Click here to book your tickets for The Northman.

Colin Firth leads the all-star ensemble of this compelling World War II drama, which adapts one of the most extraordinary stories of the entire conflict.

Operation Mincemeat was the name of the top-secret mission that successfully fooled Adolf Hitler and the Third Reich. An elite unit of military commanders and intelligence experts (including a young Ian Fleming) planted false papers on a dead body off the coast of Spain, knowing that the trail would eventually lead back to Hitler's high command. This ruse ultimately aided and abetted a covert Allied invasion of Axis-occupied Sicily, a move that helped turn the tide of the war.

Matthew McFadyen, Jason Isaacs, Johnny Flynn and Kelly Macdonald are among the familiar faces in this engrossing story of courage and resilience.

Click here to book your tickets for Operation Mincemeat.

6. Fantastic Beasts: The Secrets of Dumbledore (on release now)

The Wizarding World edges ever closer to the events of Harry Potter in the third of five Fantastic Beasts movies. Harry Potter screenwriter Steve Kloves is drafted in to embellish the backstory of the eponymous Dumbledore (a returning Jude Law), as he weighs up his conflicted history with the war-mongering Grindelwald (Mads Mikkelsen, replacing Johnny Depp).

Running in parallel with the impending pure-blood/muggle conflict are the antics of magizoologist Newt Scamander (Eddie Redmayne) and his allies. Expect more of the eye-popping beasts that characterise this franchise, including the adorable and all-important Quilin. Memorable new faces include American potions professor Eulalie 'Lally' Hicks, played by Jessica Williams, and the younger iteration of Dumbledore's brother, Aberforth (Richard Coyle).

Click here to book your tickets for Fantastic Beasts: The Secrets of Dumbledore.

Sam Rockwell voices the deviously likeable Mr. Wolf in this adaptation of Aaron Blabey's popular children's graphic novel. The Bad Guys mixes up humans and anthropomorphic animals for a criminal caper in which it's good to be bad. Or is it?

Buoyantly animated, and scored with jazzy fizz by Daniel Pemberton, the movie explores what happens when career crim Mr. Wolf decides to go on the straight and narrow, to the dismay of his multifaceted team.

Click here to book your tickets for The Bad Guys.

8. Sonic the Hedgehog 2 (on release now)

Sega-themed sequel Sonic the Hedgehog 2 once again aims to run rings around the box office competition. The titular video game character, once again voiced by Parks and Rec's Ben Schwartz, must battle his fiendish nemesis Doctor Robotnik, played by a returning Jim Carrey and now sporting the signature moustache/bodysuit arrangement from the games. This time, Robotnik has enlisted the help of echidna Knuckles (Idris Elba) to help him find the all-powerful Master Emerald, with which he can rule the world.

How many Sega references can you spot within the movie itself? And how many facial contortions will Carrey undertake in the course of one scene? Find out for yourself.

Click here to book your tickets for Sonic the Hedgehog 2.

Oscar winner Jared Leto transforms into a living vampire in the latest instalment of the Sony Spider-Man Universe. His character, brilliant yet afflicted scientist Michael Morbius, becomes imbued with vampiric abilities and super-strength, which is handy when his former childhood friend Lucius (Matt Smith) also absorbs the same abilities and goes on the rampage.

The movie occupies the same universe as the two Venom movies, starring Tom Hardy, but you may be curious as to how it connects to the adjacent Tom Holland Spider-Man movies? Of course, we're not going to tell you here...

What will you be watching in Cineworld this May Bank Holiday? Let us know @Cineworld. And don't forget that you can watch all of these movies, plus preview screenings and lots more, with a Cineworld Unlimited membership.