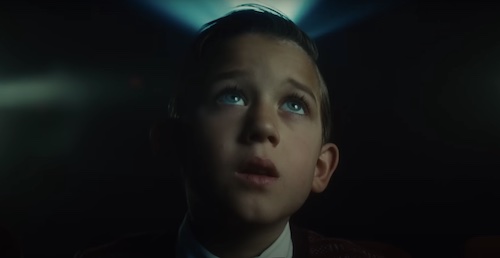 When Steven Spielberg turns his attention to the subject of his own childhood, one sits up and takes notice. The revered director of Jaws, E.T., Schindler's List and countless other classics now brings us his most intensely personal project, The Fabelmans, fashioning a delicate and delightful ode to his own upbringing.

The movie, written by Lincoln scribe Tony Kushner, focuses on young kid Sammy Fabelman and his relationship with his mother and father, played by Michelle Williams and Paul Dano. All of the actors in the movie are facsimiles of Spielberg and the important figures in his life, and the other important influence is, of course, cinema.

As Sammy grows up (he's played as a teenager by Gabriel LaBelle), we witness his filmmaking ambitions bearing fruit. Having been bedazzled by a cinema visit to watch The Greatest Show on Earth, Sammy channels his nascent passion into his own Super 8 movie projects.

However, Sammy's parents differ in their opinion of his moviemaking. His creatively-minded mother, Mitzi, is encouraging of Sammy's abilities while his father Burt sees it as more of a hobby. Outside of his immediate family circle, Sammy is schooled by his surrogate uncle Bennie (Seth Rogen) and his actual (great) uncle Boris (Judd Hirsch).

The movie promises to wrap filmgoers of all ages in an affectionate and magical spell as the inner life of a legendary director unspools in front of our eyes. Here's the new poster – as you can see, it stresses the family dynamic from the point of view of a child (a classic Spielberg trope). The Fabelmans has been critically acclaimed. Steve Pond of The Wrap writes: "The film shows a light touch that doesn't detract from the very real depths that are being explored. That The Fabelmans is one of Steven Spielberg's most personal movies was never in doubt; that it's also one of his most original and most satisfying in years is a welcome bonus."

Many are now tipping The Fabelmans for Oscar success. Can Spielberg clinch his second Academy Award for Best Picture and his third for Best Director? With the movie on release in the UK on January 27, 2023, there's plenty of time for you to speculate.

In the meantime, check out the trailer for a vivid sense of the film's atmosphere and keep up to date with our 2023 Oscar predictions.