Home Blog list page To infinity and beyond: Buzz Lightyear's 11 most memorable moments from the Toy Story franchise

To infinity and beyond: Buzz Lightyear's 11 most memorable moments from the Toy Story franchise

Are you looking to immerse yourself in the backstory of one of the most celebrated and loveable toys of all time? Then a Cineworld visit to see Lightyear on the big screen promises to take you to infinity and beyond.

The latest slice of wondrous animation from Disney-Pixar brings us the origin story of the Tim Allen-voice Buzz toy, whom we first met in the original Toy Story. The actual Buzz is a brave, lantern-jawed explorer of forbidden worlds, voiced by Avengers star Chris Evans.

Lightyear is overflowing with intergalactic marvels and eccentric characters voiced by the likes of Taika Waititi and Keke Palmer. Before you venture to Cineworld to watch the movie, we've selected our 11 favourite Buzz Lightyear moments from the masterful Toy Story series.

A toy who believes he's a real space ranger from Star Command? Toy Story's delightful identity confusion riff ensures that Buzz Lightyear is a character as poignant as he is hilarious.

Tim Allen's unmistakable vocal chops are present right from Buzz' classic introduction, as he solemnly surveys the landscape of Andy's bedroom as if it were a landscape from Forbidden Planet. When Woody then unexpectedly bursts his bubble, it sets up one of the greatest frenemy relationships in family movie history.

Midway through the first Toy Story movie, after Woody and Buzz have fallen into the clutches of childish pyromaniac Sid, Buzz starts to doubt his perceived space ranger identity after seeing a TV commercial for Lightyear toys. To the sound of Randy Newman's underrated 'I Will Go Sailing No More' (the melancholy B-side to the joyous 'You've Got a Friend In Me'), Buzz puts his alleged flying skills to the test, only to come down to Earth with a bump.

Despite losing an arm, this turns out to be the making of Buzz as he embraces the space ranger within, embracing the fact that, while actually a toy, he serves a serious purpose in owner Andy's life.

A space ranger Buzz isn't, but he's certainly resourceful. Spurred on by Woody's observation that he's a "cool toy", Buzz adapts to the situation in the climactic chase with Sid's vicious dog, Scud.

Just because he can't fly for real, doesn't mean that Buzz can't improvise a descent from a firework straight into Andy's car, restoring normality again after a whirlwind adventure. It's an exhilarating scene that gives rise to Toy Story's most famous line, reminding us that there is more than one way to look at a situation or a character. This ability to sneak in profound philosophical depth beneath eye-popping CGI animation would swiftly become a Pixar hallmark.

When Woody is kidnapped by a venal toy collector, it falls to Buzz and the rest of the gang to rescue him. However, a kind of hilariously loopy Dead Ringers with toys scenario ensues when the hero Buzz is imprisoned by one of his identikit clones. The alternate Buzz then teams up with our unwitting Scooby gang on the hunt for Woody.

This allows Toy Story 2, arguably one of the greatest sequels of all time, to restore the hilarious 'Buzz as a space ranger riff' while pushing it to even funnier extremes. It also allows Buzz to effectively confront himself – he's reminded of what it once felt like to have an ill-conceived view of one's destiny, and how it's vital to confront the truth. That Toy Story 2 smuggles in these deceptively complex undercurrents in the midst of a rollicking family adventure is a sign of the movie's brilliance.

2. Buzz reminds Woody of his purpose

The brilliance of the Toy Story franchise resides in its reliability. Just like humans, the toys, primarily represented by Woody, are occupied by thoughts of obsolescence. Although they don't age, they are at risk of being junked by their current owner.

Under the tutelage of the manipulative, embittered Prospector Stinky Pete (Kelsey Grammer), Woody contemplates turning his back on Andy forever. However, a forceful yet honest intervention from Buzz shows that while Andy's ownership has a shelf life, its value lasts forever. In the process, Toy Story 2 picks up the threads of the Woody/Buzz friendship that was established in the first movie and deepens it to quite remarkable degrees.

3. Buzz and Buzz versus Zurg

In a brilliantly funny riff on Star Wars, both the hero Buzz and the delusional Buzz confront their nemesis, the villainous Zurg. (It also neatly circles back to the film's opening sequence, which dramatises the kind of toy-on-toy conflict that kids love to imagine.) The pint-sized Darth Vader riff is also convinced that his fictional backstory is real, leading to an elevator stand-off that twists The Empire Strikes Back's most famous scene to fantastic effect.

In a sign of how good-natured the Toy Story franchise is, we eventually see the alternate Buzz and Zurg fully reconciled. Compassion, humour and vibrant animation all comes together to complete a superior sequel.

Round three for the much-welcome 'Buzz as space ranger, not a toy' routine. Only this time, it's much more personal. In the third, and arguably best, Toy Story movie, there's a genuine sense of villainy from primary antagonist Losto (Ned Beatty) who kidnaps Buzz and restores him to a demo setting.

Lotso presides over the Sunnyside Daycare Centre where, in one of the movie's most inspired and brilliant flourishes, a group of toy-mad toddlers unleashes Godzilla-like destruction on all and sundry. With Buzz's autonomy out of the way, Lotso can cement his grip on Sunnyside – but Woody has other ideas. Watching Woody rally the troops and begin the fight back is as hysterically funny as it is tense and exciting (the image of Potato Head as a tortilla still kills us).

Buzz Lightyear or Don Juan? It's hard to decide in this, one of the funniest and most memorable scenes of the entire Toy Story franchise. For a character who is so often the straight-laced voice of righteousness, watching Buzz go full Zorro is endlessly entertaining.

When Woody and the gang accidentally warp Buzz's factory settings, it sets in motion plenty of flamenco guitar, mellifluous turns of phrase and doe eyes cast towards Jessie (Joan Allen). It's another sign of how Pixar's writers have a seemingly endless well of inspiration to draw on, forever altering our expectations and expertly alternating moments of poignancy with rib-tickling hilarity.

At the time of Toy Story 3's release, everybody deemed it a pitch-perfect conclusion to a magnificent trilogy of movies. It was especially transcendent and moving for the first-generation Toy Story fans who had watched the original film in the cinemas; by the time the third movie rolled around, they were analogous with Andy's age, striking even more bittersweet notes.

Truthfully, it's hard to hold back the tears at Andy's departure as he sets off for college. It taps into our universal reluctance to leave our childhood behind, even as adulthood beckons. In a beautiful passing of the torch, Andy passes his beloved friends onto a new owner, Bonnie, ensuring that a special legacy of memories will be passed on.

There's a poetic symmetry and beauty to the way that Randy Newman's moving score resolves itself beneath a final conversation between Woody and Buzz. And the camera then cranes into the sky to observe the sort of cloud patterns that we saw on Andy's wall at the beginning of the first Toy Story. Simply perfect.

In the fourth, and currently final, Toy Story movie, Woody and Buzz must again grapple with notions of ownership and relevancy. When Woody takes up with the makeshift Forky and finds himself incarcerated in a creepy old antique shop, Buzz must once again step in to save the day.

Truth be told, the fourth movie is more Woody's movie than Buzz's. However, when the latter is installed as a fairground prize, it's a catalyst for introducing two new characters: Bunny and Ducky, voiced to scene-stealing effect by comedians Jordan Peele and Keegan Michael-Key. (The former is now also cemented as the director of the Oscar-winning, and decidedly child-unfriendly, Get Out.)

It may not match the euphorically gorgeous climax of Toy Story 3, but the ending of Toy Story 4 still resonates with a sense of profound empathy for its characters. The masterstroke lies in how the filmmakers bring everything back to Woody and Buzz: through thick and thin, they are now completely simpatico with one another, which is how Buzz is able to persuade Woody to make his toughest choice.

Torn between returning to his new owner Bonnie and a liberated existence with Bo (Annie Potts, who was absent from the third movie), Woody again finds himself at a crossroads. It's a testament to how well Buzz understands his friend that he persuades Woody to stay with Bo. Buzz understands the importance of transcience and moving on, and in doing so, he grants Woody the greatest gift of all: the freedom to make his own choices without an owner.

Are you ready to head to infinity and beyond in Cineworld? Then click here to book your Cineworld tickets for Lightyear, on release from June 17th. 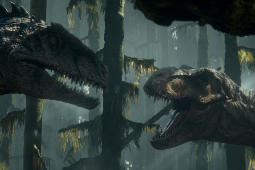