Ahead of Cineworld's new opening date on 31st July, we wanted to bring you exciting news of the movies coming up. You may well know about the 2020 movies and classic releases you can watch on the big screen. Now, we want to bring you details of the Christopher Nolan blockbusters headed back to Cineworld in the near future.

We're anticipating the release of Nolan's latest movie Tenet, scheduled for release on 12th August, by screening several of his most spectacular, jaw-dropping epics. Here's what you need to know.

CHRISTOPHER NOLAN MOVIES SCREENING IN CINEWORLD AHEAD OF TENET

Nolan re-imagined the Batman mythology as a gritty, grounded crime epic that swapped elaborate Gothic set designs and campy costumes for something more believable. Christian Bale anchors the blockbusting trio of Batman Begins, The Dark Knight and The Dark Knight Rises, bringing commanding authority to the role of Bruce Wayne/Batman. And the rich supporting cast adds further vibrancy to Nolan's depiction of Gotham, most famously the Oscar-winning Heath Ledger's iteration of the Joker in The Dark Knight.

If you missed Nolan's groundbreaking comic book trilogy in IMAX the first time around, now's the time to make amends. Experience Wally Pfister's sweeping cinematography the way it was meant to be experienced – both The Dark Knight and The Dark Knight Rises utilised IMAX cameras to help pull audiences into a comic book world without rules. And the immersive soundscape is another key IMAX factor, with Hans Zimmer and James Newton Howard's moody soundtracks setting an appropriately dark tone.

Dreams collapse and imaginations are fired in Nolan's imaginative 2010 thriller. Fresh off the success of Batman Begins and The Dark Knight, Nolan was given carte blanche by Warner Bros. to imagine a wholly original scenario, one that would demand the attention of an audience as layers of subconscious intrigue unfold in front of our eyes.

Leonardo DiCaprio leads a starry cast as Dominic Cobb, tasked with leading a team inside the head of another man to plant the seed of an idea. The audacious notion is called 'inception', and it allows Nolan, plus his regular collaborator Wally Pfister, to dream big with revolving corridors, James Bond-riffing snow set-pieces and lots more.

The dreamscapes of Inception hooked global audiences during its initial run, with the film grossing more than $800 million worldwide. Now, you can venture back into the area of psychological crime with the IMAX presentation promising to add futher jaw-dropping dimensions of intrigue.

Interstellar (screening in IMAX only)

Love transcends time and space in Nolan's galaxy-spanning sci-fi adventure, which draws on the knowledge of astrophysicist Kip Thorne for added authenticity. Matthew McConaughey is the pilot who must leave a blighted Earth to find a new home for mankind. However, Cooper must reckon with the void that opens up between himself and his young daughter Murph, left behind on Earth as her father begins an extraordinary, pioneering journey through a black hole.

Nolan's imagination reaches new heights in Interstellar, as we sweep from planets with mountain-sized waves to a fraught docking sequence set to Hans Zimmer's organ-laden score. Interstellar was widely acclaimed as an IMAX feast on its initial release in 2014, and very soon you can experience the magic all over again.

Dunkirk (screening in IMAX only)

WHAT DO WE KNOW ABOUT TENET SO FAR?

As far as the story is concerned, not much at all. However, that's classic Christopher Nolan territory – his films are shot amidst high levels of secrecy, and he's reluctant to divulge any details that would spoil the viewing experience.

BlacKkKlansman's John David Washington leads the cast as an operative tasked with preventing global armageddon. He's joined by The Lighthouse's Robert Pattinson (soon to be our new Batman) for a story of 'time inversion' that plays out across multiple continents. Kenneth Branagh and Nolan favourite Michael Caine also feature in the cast.

With a huge budget of $205 million, it's little wonder that Nolan has described Tenet as his "most ambitious" movie so far – remarkable given that he's made the likes of The Dark Knight and Inception. How will the film's highly mysterious time-manipulating storyline pay off? We'll have to wait and see.

WHEN IS TENET RELEASED IN CINEWORLD?

Tenet will now be released on 12th August 2020. Check out the trailer below, and also our evolving list of Christopher Nolan movies in order of release. 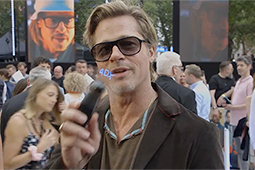