Did you watch Dune in Cineworld cinemas over the weekend? If you did, no doubt you were awed by the sheer scale and intricacy of Denis Villeneuve's science-fiction saga, which is adapted from the first half of Frank Herbert's 1965 novel.

Given that Dune is a complex minefield for the uninitiated, we thought we'd lend you a helping hand. For those who've seen the film but have not read Herbert's book, here are five important details set to play a key part in the sequel, which is due to arrive on 20th October 2023.

SPOILERS FOR THOSE WHO HAVEN'T SEEN DUNE: PART ONE

1. The moon of Arrakis and the kangaroo mouse

Arrakis' second moon Krelin is dubbed 'Muad'dib' by the Fremen. The term 'Muad'dib' is the indigenous phrase for the kangaroo mouse found on Arrakis, whose shape resembles a crater on Krelin. The mouse is admired by the Fremen for its ability to survive Arrakis' blistering, wind-scorched conditions. It was also spotted by Paul (Timothee Chalamet) when he and Lady Jessica (Rebecca Ferguson) emerge from their sand-covered tent following the Harkonnen betrayal. The phrase 'Muad'dib' is soon applied to Paul himself after he is adopted into the Fremen collective. He finds a kindred spirit in the mouse's tenaciousness, and 'Muad'dib' becomes his adopted Fremen name.

2. Lady Jessica in the cave

Remember that brief shot of Jessica with what appeared to be hieroglyphics visible on her face? It's an important portent of what's to come in Dune: Part Two. (Note the presence of her blue eyes in the screenshot below – this indicates the influence of the spice over which everyone is battling.) The image is likely a reference to the critical 'Water of Life' sequence, which has ties to the birth of Paul's sister, Alia, and the development of Paul himself, particularly his transformation into the messiah known as the 'kwisatz haderach' (translated as 'the shortening of the way'). The 'water of life' is in fact bile expunged from the Arrakis sandworms, and its properties have the ability to confer extraordinary abilities or instigate death. It's also connected to Paul and Lady Jessica's relationship with the mysterious yet controlling Bene Gesserit order, which in turn comes to have an impact on the role of the Padishah Emperor (oddly absent from the first film) and the Guild of Navigators. Dave Bautista didn't have much of a role in Dune: Part One, but rest assured that his warmongering character, Glossu 'Beast' Rabban Harkonnen, will have a more important role in Part Two. Rabban is pitted against his cousin, the yet-to-be-revealed Feyd Rautha, by his scheming uncle, Baron Vladimir Harkonnen (Stellan Skarsgard). The complex and malicious interplay between the Harkonnen clan members is an important stepping stone towards Dune's ultimate endgame, with Rautha emerging as a particularly dangerous antagonist. In David Lynch's 1984 adaptation of Dune, the character was played by Sting in winged underpants. Can Dune: Part Two obliterate all such associations?

4. The role of Thurfir Hawat

In Dune: Part One, you might have been confused by the sudden disappearance of the Atreides 'Mentat' Thurfir Hawat (Stephen McKinley Henderson). Rest assured, he will play a vital role in Dune: Part Two should Denis Villeneuve express fidelity towards Frank Herbert's source material. After the elimination of the Harkonnen 'Mentat' Piter de Vries (David Dastmalchian), undertaken by the immobile Duke Leto Atreides (Oscar Isaac), the Baron manipulates Thurfir Hawat into serving him. Once again, this is an important sub-plot rife with all kinds of dramatic implications, Oh, and the absent Gurney Halleck (Josh Brolin) will also have a part to play...

5. The Fremen tribesperson riding the worm

This was a throwaway shot at the end of Dune: Part One, but a very important one. The Fremen have learned to co-exist with the gargantuan Arrakis sandworms, whom they dub 'Shai-Hulud' (translated from the Arabic as 'the old man of the desert'). They can anticipate the movement of the worms beneath the sand and have devised a particular walking style (seen in the first movie) to avoid attracting attention. The Fremen ability to ride the worms with the use of special 'maker' hooks is a key set-piece in the second half of Frank Herbert's Dune novel, and we can't wait to see how Denis Villeneuve will visualise it.

Can't wait to watch the movie again? Then click here to book your tickets for Dune, on release now in Cineworld cinemas. Dune: Part Two will be released on 20th October 2023. 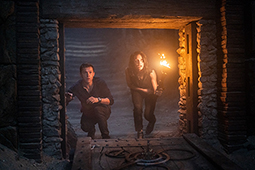