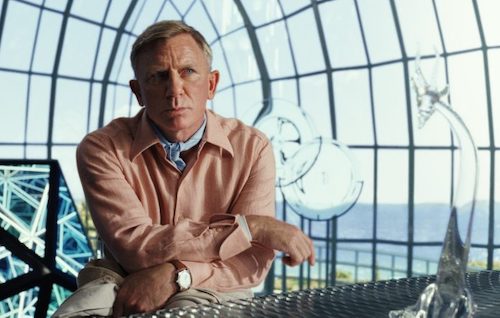 Glass Onion: A Knives Out Mystery is on limited release at selected Cineworlds this November. Planning to give the old brain cells a workout in the run-up to Christmas? This is the perfect way to do it as you soak up the mischievous fun and shocking twists of Rian Johnson's brand-new Benoit Blanc mystery on the big screen.

Daniel Craig returns to his career-redefining role as Blanc, the mysterious sleuth who can seemingly expose the most impossible of riddles. And his latest is a real doozy. Invited to a murder mystery party at the Greek island retreat of technocrat Miles Bron (Edward Norton), Blanc suddenly finds that his skills are more in demand than ever before.

With a stacked cast including Kate Hudson, Janelle Monaé, Dave Bautista and Leslie Odom Jr., there are plenty of suspects to choose from.We're not here to ruin the surprise for you (naturally). However, we're getting into Blanc's headspace to explore where he's at in the sequel, and why you need to be very excited to make his acquaintance once again.

1. He's in a funk after the events of the first movie

We're re-introduced to Benoit in the midst of COVID lockdown. He's stuck indoors and lying in the bath, playing an online brain puzzler game with several noted celebs (we won't say who they are – two of them make their poignant final appearances on the big screen).

Having apprehended the criminal in the first Knives Out, Benoit is clearly stewing. He's the equivalent of the classic sleuth Sherlock Holmes who had the habit of expressing a sense of stagnancy in a mellifluous manner via his violin. Blanc, however, is doing it via the COVID-mandated principles of remote connection.

However, upon being summoned by his flatmate (we won't give away who's playing that role either), Blanc is suddenly drawn into another gripping real-life mystery...

2. He's genuinely excited to get the grey cells working again

It was clear on watching the first Knives Out that Daniel Craig was having a blast with Blanc's character. No doubt a large part of that was down to the absence of bruising and dangerous James Bond stuntwork – instead, verbal and expository athletics came into play, particularly during Blanc's dazzling climactic sum-up when the culprit was revealed.

Craig brought an unexpected looseness and lightness of touch to the role, quite a shock for those of us accustomed to his gritty portrayal of 007. Fans will be delighted to hear that Craig doubles down on the infectious, impish sense of fun in Glass Onion, fully uncorking Blanc's abilities after an extended amount of time shut away indoors during the lockdown.

This is what Blanc does best, and his prolonged absence from real-life crime only amplifies his sense of glee when an impossible new puzzle rears its head.

3. His outfits are more outrageous than ever

The secret MVP of Glass Onion? It has to be costume designer Jenny Eagan whose brilliantly gaudy outfits communicate the spirit of the movie's ensemble, including Blanc.

For the second time in his career, Craig is set to make a piece of swimwear iconic. However, Blanc isn't sporting budgie smugglers a la 007. Instead, he's given a stripy, beach-friendly one-piece that he sports during his stay at Miles Bron's elaborate Greek hideaway. It's eye-popping yet oddly appropriate, as Craig himself explains.

"Jenny, as you can easily see, has a huge sense of fun," Craig told Entertainment Weekly. "She came up with that herself. I had some other ideas, and she showed me a couple of things, and she was like, 'What about this?' And I was like, 'Yeah, come on, let's do it.'

This is where we absolutely have to resist spoilers. Remember in the first movie when Blanc became aligned with vomiting house cleaner Marta (Ana de Armas)?

Let's just say he finds another unexpected ally stepping out of the shadows in Glass Onion, an individual who humanises his super-sleuth investigation and provides an important emotional element.

However, that's not to say that Blanc has gone soft and lost his marbles. Right from the moment he sets foot on Bron's private island, his Benoit-tingle (can we call it that?) goes into overdrive – and that's before the shocking event that sets the wider plot in motion.

Craig's sneaking, cat-like posture and alert gaze (those baby blues sure look great on the big screen) offsets Blanc's deceptively whimsical nature. Rest assured, when he's on the case, it's going to get solved. Finding out how, exactly, is all part of the fun.

Glass Onion: A Knives Out Mystery is on limited release in selected Cineworld cinemas from November 23 to November 29.