Strewth! Aussie megastar and all-round good egg Hugh Jackman has turned 52 today. Immortalised as Wolverine in the X-Men movies, Jackman has delivered a richly diverse array of performances over the years, and not all of them have got the attention they deserve.

Here are just five of them.

Christopher Nolan's masterful period thriller is the story of warring magicans seeking the perfect magic trick. Jackman does a superb job veering between sympathy and enmity as Rupert Angier, an aristocratic trickster who can sell the illusion, but who bears little technical proficency. Christian Bale is his working class counterpart, Alfred Borden, a superior magician but a poor showman. Jackman's depiction of Angier's psychological unravelling is a riveting journey, one that crosses oceans of time and actual oceans as he obsessively pursues the elusive secret to 'The Transported Man'. A barrage of jaw-dropping twists lead us to the final reveal where Jackman chillingly evokes the cost of sacrifice, all in pursuit of the all-important prestige: the moment where the audience applauds the apparently impossible sleight-of-hand at the end of the trick.

Darren Aronofsky has garnered acclaim for the likes of Requiem for a Dream and The Wrestler. In-between those projects was The Fountain, an ambitious and inscrutable story of a love transcending multiple generations and vast swathes of time. Jackman really stretches himself, physically and emotionally, as three iterations of the same character, each of whom is seeking a cure that will save the great love of his life (Rachel Weisz). There are rich philosophical connections between the various story strands that baffled critics and audiences on first viewing, but which bear repeat screenings. Plus, we get a bald Jackman floating around in a glowing orb – that's not something we got in The Greatest Showman.

There's no denying that Wolverine is Jackman's signature role. His feral interpretation of the classic Marvel character is likely to remain the definitive one for years to come. However, he has dabbled in other popcorn movies, including this likeable robot boxing movie, inspired by a short story by Richard Matheson. Jackman plays a boxing promoter who now tours cyborgs, rather than humans, in matches across a near-dystopian America. All the while he's reconnecting with his estranged son, and Jackman does a great job selling us on both the macho fun of the premise, and the sweetly sentimental redemption story at the centre.

An altogether darker role for Jackman comes in this uncomfortably intense thriller from director Denis Villeneuve (Blade Runner 2049; the upcoming Dune). Jackman taps into that characteristic Wolverine rage, but not for the purposes of popcorn thrills. Instead, he's scarily convincing as an unhinged father defying the law to locate his kidnapped daughter. This puts him in conflict with a local detective (Jake Gyllenhaal), and as the stakes ramp up, so does the drama become more upsetting. It's a striking reminder that there's more to Jackman than just comic book roles; here, he's battered, bruised and utterly believable as a suburban dad driven to horrendous extremes by circumstance.

Jason Reitman's underrated political drama elicits a subtle performance from Jackman, one that combines his showman instincts with that capacity for broiling anxiety. The Front Runner is based on the true story of 1984 Senator Gary Hart, the golden boy and Presidential candidate whose life fell apart spectacularly when he was accused of an extramarital affair. Jackman does a superb job as the slick patina of Hart's political persona starts to wear off, replaced by a sweaty lip and wavering gaze amidst the rise of America's tabloud media frenzy.

Which Hugh Jackman role do you think is most underrated? Let us know @Cineworld. 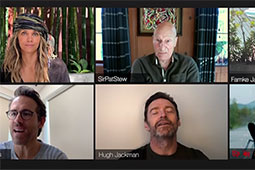