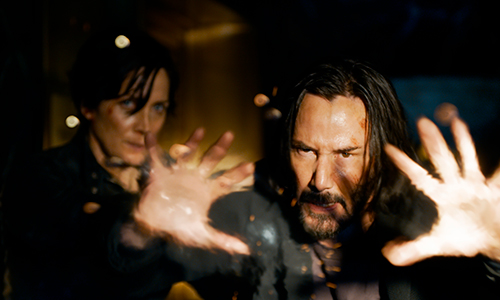 The Matrix Resurrections is freighted with a lot of questions, the biggie being this one: how are Neo and Trinity alive? The world-saving duo sacrificed themselves at the end of 2003's The Matrix Revolutions, in the process liberating humanity from the scourge of the machines and destroying the concept of artificial reality forever. Or so we thought...

What we do know is that Reeves' Neo aka Thomas Anderson has been restored to some kind of normal human routine, but he's beginning to suspect that the world isn't all it seems. There are vaguely sinister characters played by Neil Patrick Harris and Jonathan Groff, the latter of whom seems to be the reinvented version of Hugo Weaving's villainous Agent Smith, going by the most recent trailer release.

When Anderson meets Tiffany (Moss), otherwise known to us as Trinity, reality as he knows it starts to fracture. They have a connection but cannot articulate what it is exactly. We reckon that the storyline inverts the principles of the original Matrix movie, released in 1999. In that movie, Trinity brought Anderson/Neo into the collective of human rebels who were operating outside the simulation known as the Matrix. This was so Neo could realise his destiny as 'The One', the messiah destined to save humanity. In Resurrections, it appears that Neo falls in with a new group of rebels and must take it upon himself to unlock Tiffany/Trinity's past memories, with drastic consequences for the future of mankind. This would be a neat way of infusing a greater sense of agency and dynamism into the role of Trinity, as opposed to her just being Neo's shadow.

In this behind-the-scenes featurette, Keanu Reeves and Carrie-Anne Moss discuss the rebirth of their characters in mildly spoilery fashion. (If you'd rather go into the movie cold, we'd advise coming back to this blog post after seeing it.) Reeves describes the movie, directed by Lana Wachowski, as "not a retelling but a new telling", which is exciting yet still enigmatic enough to stoke our interest.

Click here to book your tickets for The Matrix Resurrections, which opens in Cineworld cinemas on 22nd December.