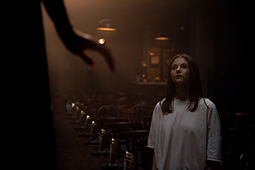 Last Night in Soho is the new movie from Shaun of the Dead and Baby Driver director Edgar Wright. It tells of a country girl (Jojo Rabbit's Thomasin Mackenzie) who relocates to London to pursue her dreams of being a fashion designer. While there, she unexpectedly time-travels back to the capital's swinging 1960s heyday where she finds herself in the body of another woman (The Queen's Gambit's Anya Taylor-Joy). As you might imagine, it doesn't take long for things to become truly sinister.

Although Wright has dabbled in the horrific in his previous films, Last Night in Soho is his first true horror movie, one that aims to chill, thrill and discombobulate in equal measure. Wright collaborates with 1917 writer Krysty Wilson-Cairns and an excellent cast (including Matt Smith and Dame Diana Rigg in her final film role) to sketch an affectionate ode to classic chillers including Michael Powell's Peeping Tom (1960) and Roman Polanski's Repulsion (1965).

The first reviews are in from the 78th Venice Film Festival and, for the main, they praise Wright's attention to period detail and his giddy sense of nostalgia. In other words, exactly what we've come to expect from a director who has consistently repackaged his favourite film genres with wit and pizazz.

"Wright is both a gifted stylist and master technician," writes Robbie Collin in The Telegraph, "and Soho moves as smoothly as a Maglev train, gliding on an invisible cushion of its own meticulous craft. Its pristine pop-art finish occasionally feels at odds with the grit of its milieu; as it barrelled along, I felt a constant contact-high, yet little contact grubbiness. But the high is rich and giddying, and the weaving of allure and horror gleamingly assured."

"Taylor-Joy is perfect for her role," writes Geoffrey Macnab in The Independent. "She oozes charisma and star quality. Her performance of 'Downtown' is spine-tingling. Wright captures both the exhilaration of the era and its darker, seedier side: the misogyny and sexual violence. The Sixties interludes, though, are only one part of Last Night in Soho. The story is also set in the present day – and unfortunately the contemporary scenes are nowhere near as vivid as those from half a century ago."

Indiewire critic Nicholas Barber says the movie is less frenetic than Wright's other movies, and all the better for it. "Left behind is (Wright's) trademark hyperactive editing and insistent post-modernism; in its place is flowing movement and intense emotion. It's not just different from his previous films; it's different from everyone else's previous films ... Last Night In Soho is still an intoxicatingly distinctive, delirious creation that soars out of every pigeonhole you put it in."

Writing for Deadline, Pete Hammond gives the movie a rave review. "Leave it to Edgar Wright to play with genre expectations and deliver yet another delightfully off-kilter thriller that also thrills with its undeniably trippy atmosphere and blast to the past of swinging 60s London... A more vibrant and exciting addition to the genre would be hard to find. McKenzie makes the most of this full blown starring role, well out of whack with what we have seen her do to date, and brings it home. Taylor-Joy is a perfect counterpart to Eloise. Smith is properly gangsteristic."

Nevertheless, not all the reviews are positive. Variety critic Guy Lodge says the movie fails to reach the levels of Wright's previous films: "Last Night in Soho is a surprising misfire, all the more disappointing for being made with such palpable care and conviction. Wright's particular affections for B-movies, British Invasion pop and a fast-fading pocket of urban London may be written all over the film, but they aren't compellingly written into it, ultimately swamping the thin supernatural sleuth story at its heart. Which is to say that Wright has lovingly made Last Night in Soho for himself and, well, it's not clear who else."

Masterpiece or misfire? You can make your own mind up when Last Night in Soho arrives in Cineworld cinemas on 29th October.