The first trailer for Spencer has emerged, showcasing Twilight star Kristen Stewart's transformation into Princess Diana. The movie, directed by Pablo Larraín, details the pivotal moment at Sandringham when Diana's marriage to Prince Charles (Poldark's Jack Farthing) started to break down. Before we get to the trailer, here's the arresting new teaser poster. Larraín is one of Chile's pre-eminent filmmakers, and scored a critical hit with 2016's English-language drama Jackie. The movie took a woozy, fragmentary look at the life of Jackie Kennedy in the wake of John F. Kennedy's assassination, eliciting a superb, Oscar-nominated performance from Natalie Portman in the title role.

We can surely expect a similarly unconventional approach in Spencer. The narrative occupies a singular moment in Diana's life when she is reconsidering her marriage to Prince Charles and her position within the UK Royal Family. Stewart describes Spencer as "a dive inside an emotional imagining of who Diana was at a pivotal turning point in her life".

Stewart adds: "It is a physical assertion of the sum of her parts, which starts with her given name, Spencer. It is a harrowing effort for her to return to herself, as Diana strives to hold onto what the name Spencer means to her."

The official synopsis is as follows: 'December, 1991: The Prince and Princess of Wales’ marriage has long since grown cold. Though rumours of affairs and a divorce abound, peace is ordained for the Christmas festivities at Sandringham Estate. There's eating and drinking, shooting and hunting. Diana knows the game. This year, things will be a whole lot different.'

Putting aside the legacy of Twilight, Kristen Stewart has delivered several intriguing performances in recent independent dramas, which may indicate the tone of her Diana portrayal. Oliver Assayas' Clouds of Sils Maria and Personal Shopper, and Kelly Reichardt's Certain Women, have demonstrated Stewart's flair with brittle, complex portrayals of characters under emotional duress.

Her partnership with Larraín is certainly an interesting one. In his home country, Larrain has delivered many provocative dramas including Tony Manero and Neruda, which construct complex impressions of individuals through visual imagery and suggestion.  All the omens are good as far as Spencer is concerned. And the supporting cast is impressive: Timothy Spall, Sally Hawkins and Sean Harris all feature, although it's not yet confirmed who will be playing specific members of the Royal Family.

Can Spencer transcend its inherently controversial subject matter and fashion a tasteful yet thought-provoking commentary on the legacy of Diana? Check out the trailer and decide for yourself. Spencer is playing at the 2021 Venice Film Festival and is scheduled for release later in the year. 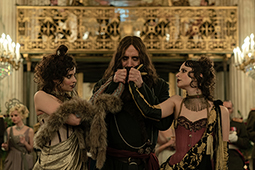 The King's Man: new trailer and poster for the Kingsman prequel movie