Home Cineworld Blog The Matrix: recapping Neo and Trinity's journey so far ahead of Resurrections 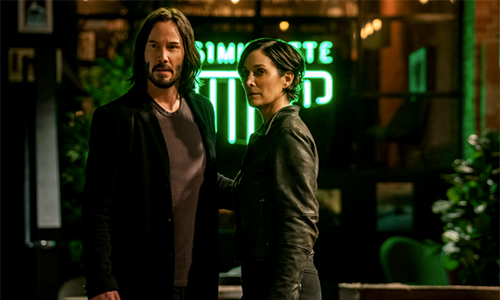 The Matrix Resurrections hits Cineworld cinemas on 22nd December, and excited as we are for the continuation of the franchise, we have a lot of questions. The movie makes it evident that Neo (Keanu Reeves) and Trinity (Carrie-Anne Moss) have both been restored to some kind of ordinary existence within the simulation known as the Matrix – but how?

We're expecting the search for answers to be jaw-dropping and spectacular as director Lana Wachowski expands the scope of the series she began with sibling Lily. The original Matrix movie blew away the competition in 1999 with its blend of smarts and style, fusing slo-mo action sequences with kung fu influences and dense philosophy about the nature of reality. And the mythology grew exponentially with the two sequels, both released in 2003.

If you weren't there at the very beginning, get up to speed with our handy Cineworld blog run-through of Neo and Trinity's journey so far.

1. Neo suspects that the world as he knows it isn't real

Thomas Anderson, computer hacker alias Neo, has long suspected that his drab existence isn't what it seems. A cryptic clue on his computer compels him to 'Follow the white rabbit.' This turns out to be a tattoo – on following its owner to a club, Neo meets Trinity for the first time. She impels Neo to ask the fundamental question: "What is the Matrix?"

After being apprehended and interrogated by the mysterious Agent Smith (Hugo Weaving), Neo decides to take the plunge and meet with Trinity again. She, in turn, takes him to rebel leader Morpheus (Laurence Fishburne) who presents Neo with a choice of red or blue pills. The red pill will show him the supposed truth about his existence, taking him "down the rabbit hole" (one of several Alice in Wonderland references dotting the Wachowskis' trilogy), while the blue pill will maintain the status quo and keep him within the realm of the Matrix Neo ultimately takes the red pill.

2. Neo joins Morpheus, Trinity and the rebels in the real world

Upon taking the red pill, Neo's reality contorts out of all proportion. He then wakes up to discover the horrifying reality: humans are being grown by machines in a gigantic futuristic battery farm, harvested for their energy. The Matrix is the illusion of the real world that has been constructed to keep these human slaves under control. Neo is one of these slaves, but Morpheus and Trinity's intervention saves him from being another drone for the machines.

Rescued from the hive mind, Neo joins the rebels on their ship, the Nebuchadnezzar, where he learns he is destined to become 'The One'. He is the person for whom Morpheus has been searching all his life, the prophesised messiah who will emerge to be stronger than the machines and the militant programs known as agents. Together with the rebels, Neo can plug himself into the Matrix at will and liberate more individuals, while the already freed humans are ensconced in the underground city known as Zion.

3. Neo becomes 'The One' and defeats Agent Smith

Initially, Neo refuses to believe he is 'The One', although flashes of his potential are displayed throughout the first Matrix movie. This is especially evident when he and Trinity launch a daredevil rescue of Morpheus from the calculating Smith's clutches, and Neo's subsequent battle with his nemesis shows him to possess remarkable levels of endurance.

However, in a surprise ambush, Smith launches several bullets into Neo's chest and apparently kills him, leaving Morpheus despondent. But a plea from Trinity aboard the Nebuchadnezzar restarts Neo's heart; it's her belief in his abilities as 'The One' that awakens his true potential. He then develops the power to stop Smith's bullets in their tracks, and he eventually implodes the agent from within, seemingly resetting the parameters of what is possible within the Matrix. Cue the Rage Against the Machine outro and trenchcoat aesthetic that dominated Y2K fashion styles.

4. Neo and Trinity are lovers but he's haunted by visions of her death

At the outset of The Matrix Reloaded, Neo and Trinity have consummated their slow-burn relationship. Together with Morpheus and the rest of the Nebuchadnezzar crew, they've joined sweaty rave central in Zion. However, for all his newfound powers, Neo is tormented by visions of Trinity being shot out of a window. He may be embracing his duty as mankind's new messiah, but there are still weak spots that his enemies are all to eager to exploit.

5. Neo discovers that Smith is alive and can multiply himself

The brilliantly scene-stealing Hugo Weaving re-emerges as the diabolical Smith. Only this time, he's not governed by the intrinsic principles of the Matrix. Alarmingly, he seems to have absorbed several of Neo's abilities, plus some new ones of his own, namely the ability to multiply. Smith posits that when Neo destroyed him, an aspect of 'The One' imprinted onto him, another sign of how the code of the Matrix has become inverted. Whatever – it's the catalyst for the famous and lengthy 'Burly Brawl' sequence in which one Neo and a million, gabillion Smiths do battle with hands, fists, projectiles and more.

Terrified that his vision of Trinity's death is about to be realised, Neo speeds to her rescue. By this point, he's practically Superman and has the ability to fly, which is evinced in the spectacular freeway chase sequence and several other set-pieces. In choosing to save Trinity, Neo explicitly ignores the choice presented by the riddle-making Architect, the creator of the Matrix, who explains that the program is currently on its sixth iteration. The Architect tells Neo that he can either reboot the Matrix or cause it to crash, therefore killing everyone still attached to it. Neo instead flies to Trinity's rescue as she's blasted out of a window, as per his vision, before he removes the bullet from her chest and revives her.

7. Neo lies in a coma and is trapped inside the Matrix

At the end of The Matrix Reloaded, Neo is sent into a coma. The Matrix Revolutions shows us that he is trapped inside a subway station within the Matrix, and unable to leave. He's trapped by The Trainman (Bruce Davison), a servant of the Merovingian (Lambert Wilson), a program that appeared in the previous movie. Neo finds himself freed when Morpheus and Trinity confront the Merovingian and demand his release.

Neo may have rescued Trinity in The Matrix Reloaded (almost at the cost of his own life), but, sadly, it doesn't come to fruition in Revolutions. As the machines come ever close to the human stronghold Zion, Neo is also forced to contend with the resurgent Smith who by this stage has assimilated the cognitive powers of the all-seeing Oracle. By this stage, Neo has been blinded by human traitor Bane, but the real tragedy comes when Neo is forced to crash-land the ship Logos to avoid an onslaught of machines. In the process, Trinity is fatally wounded and dies, which fuels Neo's anger and self-determination as the final conflict approaches.

To the thunderous, choral strains of Don Davis' score (the track title, 'Neodammerung', translated as 'Neo's Twilight', inverts Wagner's 'Gotterdamerung, classical music fans), Neo is finally able to bring Smith down. By allowing himself to be assimilated, Neo ensures Smith's doom, causing the former agent and all of his clones to be destroyed. The machines then retreat from Zion, taking Neo's body with them in the process, and the Matrix is rebooted one more time. Later, the Architect and the Oracle meet in a park as Neo's sacrifice streaks a sentimental sunset across the sky. The two characters reach a peace accord and agree that all humans will be given the opportunity to leave the Matrix should they choose to do so. When asked if she knew about this outcome, the Oracle says no, but she always believed it, bringing the implicit themes of Neo and Trinity's journey full circle.

The Lost City: everything we know so far