Home Cineworld Blog The Woman King: go behind the scenes of the Viola Davis action movie

The Woman King: go behind the scenes of the Viola Davis action movie

The Woman King casts Oscar winner Viola Davis in the role of the ultimate warrior, and it's your Cineworld Unlimited screening on September 20.

Davis plays General Nanisca, leader of the army of the African kingdom of Dahomey. The critically acclaimed film, directed by Gina Prince-Bythewood, confronts a legacy of racism and feminism as it adapts extraordinary true events that have been largely glossed over in the annals of history.

The strong cast also includes Lashana Lynch and John Boyega, but it is Davis who commands the screen as the ferocious Nanisca. The movie sports an impressive 94% rating on Rotten Tomatoes and went down a storm at the recent Toronto Film Festival.

Ahead of the Unlimited screening and the film's wider release this October, go behind the scenes in the following extracts. You'll discover how Davis and the rest of the cast trained up to transform into Dahomey military veterans.

Click here to book your tickets for The Woman King Unlimited screening. The preview takes place on September 20 prior to the movie's wide release on October 4. Check out the trailer for a glimpse at the full-throttle experience to come. 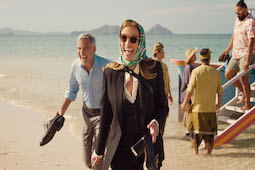 Ticket to Paradise: discover what the critics have said about the George Clooney/Julia Roberts rom-com