Home Cineworld Blog Top Gun: Maverick reviews praise the Tom Cruise movie as a thrilling example of what the big screen is made for 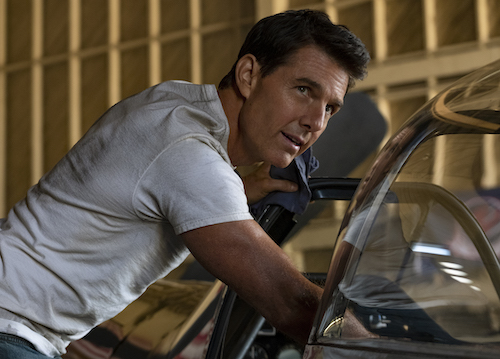 Is Top Gun: Maverick the Top Gun sequel we've all been waiting for? You'd better believe it.

Reviews for the movie have praised its seat-gripping, in-flight choreography and the irrepressible charisma of leading man Tom Cruise.

As he prepares to celebrate his 60th birthday, Cruise returns to the role that made his reputation in Hollywood: daredevil fighter pilot Pete 'Maverick' Mitchell.

Some 35 years after the events of the original Top Gun, Maverick is now tasked with training a host of new recruits, including Rooster (Miles Teller), the son of Maverick's late wingman Goose (Anthony Edwards).

Critics have lauded the movie as a joyous big screen experience with some even saying that it surpasses the original. Here's a flavour of the responses.

"I folded my arms and prepared for the worst," writes Charlotte O'Sullivan for the London Evening Standard. "Two hours later, I was scribbling down words like “Whoa!”, “Exciting!” and “Bullseye!!” Director Joseph Kosinski, taking over from the late Tony Scott, knows a thing or two about sky driving. The coverage, and editing, are superb. In fact, the whole technical team go that extra mile in the third act."

"Top Gun: Maverick, directed by Joseph Kosinski, is a much better film than its predecessor was, and much better than it needs to be overall," is Stephanie Zachareck's appraisal for TIME Magazine. "The flying sequences are divine, sometimes tense and sometimes rapturously freeing, and they feel realistic because they’re minimally touched by CGI. (Cruise is an experienced pilot, and got extra training from the Navy on top of that; his fellow actors learned to fly as well.)

"But even its more casual sequences show definitive flair: at one point Cruise and the younger pilots, all in beachwear, cavort in the surf during a rowdy game of dogfight football. The sun glints off the men’s water-dappled pecs; their aviator sunglasses hide their inevitable squinting."

"Kosinksi, of course, has to make his Maverick work with or without the context of the original," writes Leah Greenblatt for Entertainment Weekly, "and the script, by Peter Craig (The Batman) and Justin Marks (The Jungle Book) toggles deftly between winking callbacks and standard big-beat action stuff meant to stand on its own.

"Teller and Powell are breezily appealing, actors at the apex of their youth and beauty, though the movie still belongs in almost every scene to Cruise. At this point in his career, he's not really playing characters so much as variations on a theme — the theme being, perhaps, The Last Movie Star. And in the air up there, he stands alone."

"I’d go further and say that it offers its own decisive reversal of Maverick’s dubious logic: It has plenty on its mind, and it’s gloriously alive... As Iceman, Maverick’s old adversary turned wingman, mentor and ally, Val Kilmer haunts Top Gun: Maverick from its earliest moments but enters it surprisingly late, anchoring a perfectly timed, beautifully played scene that kicks the movie into emotional overdrive."

"A smart screenplay, co-written by Christopher McQuarrie, brings freshness via Maverick’s spiky relationship with Miles Teller’s bitter Bradley ‘Rooster’ Bradshaw, the son of his old co-pilot Goose, and a sweet love story with Jennifer Connelly’s bar-owning single mum," enthuses Time Out's Phil de Semlyen. "Obsolescence never feels far away for this ageing hero, even if he still has the reflexes of a 21-year-old.

"Most of all, Top Gun: Maverick works because with its insane aerial photography to the fore, and the style-forward Oblivion director Joseph Kosinski a smart pick behind the camera, it never lets go of that simple love of flying: of men and women stress-testing high-tech machines until bits start to fall off, and the machines testing them right back."

"These days, videogame-styled blockbusters rely so heavily on CGI that it’s thrilling to see the impact of gravity on actual human beings, pancaked to their chairs by multiple G-forces," Variety's Peter Debruge observes of the film's spectacular flying sequences.

"Sophisticated movie magic makes their performances seamless with the exterior airborne shots, while the commitment to filming practically-everything practically feels like the cutting-edge equivalent of Howard Hughes’ history-making Hell’s Angels. The result is the most immersive flight simulator audiences will have ever experienced, right down to the great Dolby roar of engines vibrating through their seats."

"It feels familiar, but everyone on board clearly understands the assignment, and it’s delivered with so much oomph and affection — with a slight undertow of melancholy — that it’s impossible not to get swept up."

Are you ready aviators? Then click here to book your tickets for Top: Gun Maverick, which opens in Cineworld cinemas on May 25th.