Renowned Bollywood actor and filmmaker Aamir Khan, acclaimed for the blockbusting likes of PK (2014) and Dangal (2016), portrays the title character with a winning blend of spirit and tenacity. Laal Singh Chaddha grows to manhood against the backdrop of contemporary Indian history, interacting with an assortment of extraordinary individuals along the way.

Many esteemed Bollywood luminaries have been responsible for bringing Laal Singh Chaddha to the screen. The script is written by Atul Kulkarni, a noted actor, writer and producer whose credits include the screenplay for the Indian Marathi-language movie Natarang (2010).

The director of Laal Singh Chaddha is the esteemed Advait Chandan who helped transform 2017's Secret Superstar into the sixth-highest-grossing Indian movie release of that year.

We sent the brilliant team from @magicflicks_ to interview Aamir Khan himself. Scroll down to watch our discussion in which Aamir talks about his preparation for the role and his experiences in playing the well-intentioned Laal Singh Chaddha.

Laal Singh Chaddha is on release now in Cineworld cinemas, available in both Hindi and Tamil versions, and is also showing in Superscreen. The screen is larger than normal, coupled with premium seating and all-encompassing Dolby Atmos speakers, which means you can be enveloped in the sweep and scope of the title character's inspiring and emotional journey.

Don't forget to tweet us your responses to both the movie and our interview @Cineworld. 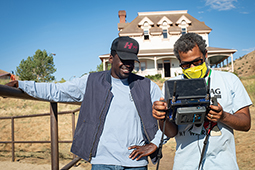