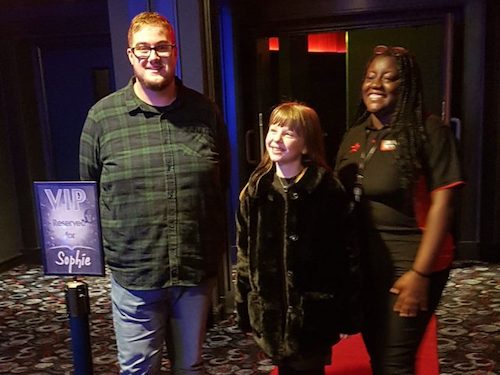 Cineworld Bedford rolled out the red carpet for a very special guest this week. Staff members were delighted to give the VIP treatment to 11-year-old Sophie Hartley-Booth, the local school pupil who saw off considerable competition to land a role in Roald Dahl's Matilda the Musical.

The delightful movie, on release now at Cineworld, is adapted from Tim Minchin and Dennis Kelly's blockbusting stage production. Sophie plays Jane Banks, a classmate of the eponymous brainbox Matilda, played by Alisha Weir, and she won the role from over 2,000 hopefuls.

Sophie's character is one of the memorably 'revolting' children running rings around the monstrous Crunchem Hall headmistress, The Trunchbull. Dahl's classic villain is played by a truly scary Emma Thompson, one of several A-listers in the movie who have great fun unleashing their inner pantomime baddie.

However, Sophie's dream very nearly didn't come true. She had reached the final stages of the audition process just as theatres were forced to close for the lockdown. Fortunately, her wish paid off and she landed the role in the movie, which was filmed over nine months both inside and outside of lockdown.

Sophie attends dance and musical theatre classes at Sandford School of Dance and got an audition for the role through her agent, AMKids Agency in Thurleigh. She is currently performing as Jane Banks in the West End production of Mary Poppins.

As just six of the main characters were allowed to attend the VIP premiere of the film in London, Sophie’s grandmother, Gwyneth Jones, contacted Cineworld at Aspects Leisure Park to see if they could help make their viewing of the film a little bit special.

Sophie's family was overwhelmed by how Cineworld Bedford went above and beyond their expectations. Gwyneth said: "We arrived and there to greet her was the manager and other members of staff complete with the red carpet laid out, a personal VIP notice and they presented her with two presents, one being a large poster of the film and a lovely little dish in the shape of an umbrella with Mary Poppins Returns.

“How thoughtful was that? She was so surprised and left the cinema feeling very special and very happy. Customer service at an outstanding level.”

You can watch Sophie's delighted reaction in the following Twitter video.

Thank you so much @cineworld Bedford for making my evening so special to watch #matildafilm pic.twitter.com/0MULCxqmLd

Catch Sophie on the big screen in Roald Dahl's Matilda the Musical, on release now at Cineworld cinemas.