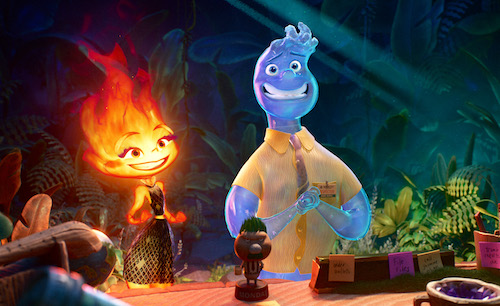 The natural elements take on a life of their own in Disney-Pixar's next feature Elemental. As one would expect from the geniuses behind Toy Story and Inside Out, the premise is a corker, and it promises to have us thinking about life in a completely different way.

Jurassic World: Dominion's Mamoudou Athie voices chilled-out water dude Wade Ripple. He exists in a world where water, earth, wind and fire are personalised and interact with one another, not unlike what Inside Out did for our emotions.

When Wade meets the fiery Ember (voiced by Nancy Drew star Leah Lewis), it sets in motion a classic voyage of discovery. No doubt actual water will be springing from our eyes as we're watching – this is a Pixar movie, after all.

Check out the first poster below. Are you now burning with curiosity? Well, here's the first trailer for Elemental that teases the visually stunning world of Element City. The movie is realised by director Peter Sohn who helmed Pixar's The Good Dinosaur, so check out the preview and let us know if Elemental will vault into the realm of Pixar classics. The movie is released on June 16, 2023.