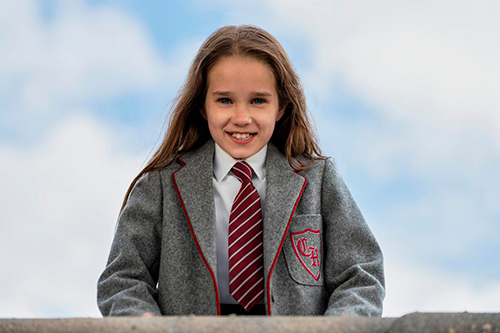 Within the course of one week, you can make the acquaintance of some delightfully revolting children and also head off into space on an extraordinary adventure.

Scroll down to find out more about each film, plus details of our Cineworld Family Ticket offer.

Matilda is one of Roald Dahl's most beloved creations, a telekinetic young girl whose love for reading is matched only by her contempt for the adults in her life.

Tim Minchin and Dennis Kelly first adapted Dahl's story as a stage musical back in 2010, resulting in barnstorming success in the West End and also on Broadway.

Now, the big-screen adaptation of the musical hits Cineworld cinemas with charming newcomer Alisha Weir in the central role.

However, the show is truly stolen by an atypically scary Emma Thompson as the fearsome Trunchbull. Almost unrecognisable while clad to the nines in an outsized costume and prosthetics, Thompson more than convinces as a child-hating monster set on a collision course with the bright and tenacious Matilda.

Click here to book your tickets for Roald Dahl's Matilda the Musical.

Walt Disney Animation Studios have a roster of classics on their books, including Frozen, Moana and Big Hero 6. The director of the last of those, Don Hall, now presents a visually wondrous and inclusive intergalactic adventure that sends us careening beyond the limits of our solar system.

Strange World focuses on the Clade family, an intrepid group of explorers whose latest venture sees them stranded on a bizarre world of potentially hostile intent. Jake Gyllenhaal voices the son who has long been in pursuit of his absentee father (voiced by Dennis Quaid) while the starry voice cast also includes Lucy Liu.

Eye-popping animation, earnest emotion and frenetic adventure – that's what we've come to expect from the Disney brand and that's what Strange World offers in droves.

Click here to book your tickets for Strange World.

Do you know about the Cineworld Family Ticket? It means that adults pay kids' prices (valid for groups of four people with up to two paying adults) and allows you to be more childish together.

In addition to the discount on the price of your seat, Cineworld's Family Ticket also gets you more than 30% off the price of a Family Special snack pack.

The Family Special includes two kids' Munchboxes – each containing a small box of sweet or salted popcorn, a Fruit Shoot or a bottle of water, plus a packet of Milky Way Magic Stars or raisins – along with a regular popcorn and two regular soft drinks for the adults in the group. Present your Family Ticket at the snacks counter and you can get it for the bargain price of just £13.90 (or £15.90 if you want to go large).