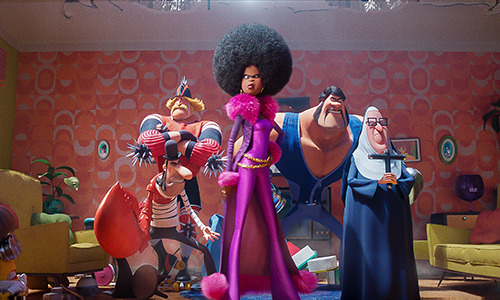 Stow away your shrinking rays and hide your fire extinguishers, because super-villain Gru and his anarchic sidekicks are back on the big screen in Minions: The Rise of Gru.

Steve Carell's vowel-mangling uber-baddie is now shown at a formative age, the story now taking place in the 1970s. The ever-loyal Minions are by his side as the young Gru attempts to inveigle himself with the hilariously dastardly Vicious 6, a group of nefarious wrong 'uns who know an evil scheme when they see one.

Ahead of seeing the movie, here's your introduction to the Vicious 6 and the noted actors voicing them.

Belle Bottom is the nefarious, seventies-styled leader of the Vicious 6. She appointed herself leader after ousting the group's previous chief, the nefarious Wild Knuckles (voiced by Alan Arkin). This technically makes them a five, but still.

Belle Bottom's voice actor Taraji P. Henson was Oscar-nominated for her moving role in The Curious Case of Benjamin Button. Henson brought some seriously stylish, anarchic energy to the 2019 action flick Proud Mary, a nihilistic thriller that modelled itself after the kind of 1970s Blaxploitation movies parodied in Minions. We're sure her Minions character Belle Bottom would be delighted with that.

You need a seemingly invincible super-villain to square off against Gru, so who do you call? Naturally, it's Rocky V and Masters of the Universe star Dolph Lundgren who, in his role as Svengeance, gleefully sends up his lunkheaded action movie image.

Replete with Scandinavian blonde locks and a penchant for rollerskates, Svengeance may be fast, but he's not too bright. (Somewhat ironically, Lundgren has a degree in Chemical Engineering.)

King of the outrageously violent B-movie, Danny Trejo is famous for the likes of the Machete series, a low-rent franchise fuelled by retribution. He also turned up in Michael Mann's acclaimed crime drama Heat. In Minions, he voices the muscular and moustachioed Stronghold, and like Dolph Lundgren, demonstrates a game willingness to parody his screen image.

Here's one for all those 1990s kids who are now taking their own sprogs to see Minions. Cult Xena Warrior Princess star Lucy Lawless voices the relentless Nunchuck, and she has a habit (sorry) of causing wanton destruction.

This match-up between actor and character name is surely one of the best gags in the new Minions movie. Hard Target and Sudden Death star Jean-Claude Van Damme voices the crab-like antagonist who snaps to attention.

Can't wait to see the Vicious 6 on the big screen? Then click here to book your tickets for Minions: The Rise of Gru, opening in Cineworld cinemas on 1 July.